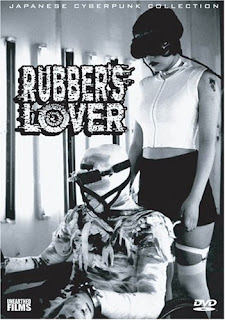 Acting as a semi-prequel to “Pinocchio 964” and cribbing its grainy black and white style from “Tetsuo the Iron Man” director Shozin Fukui thrusts us into the middle of a human guinea pig nightmare in his 1996 film “Rubber’s Lover”.
Let me start out by saying the plot is thin. Two doctors work for a shadowy, possibly miltary organization conducting a project which involves pumping human subjects full of something the simply refer to as “ether”, wrapping them in rubber to prevent them sweating, blasting them with high frequency sound and hooking them up to some device called the D.D.D. all in an attempt to bring out the subject’s psychic tendencies.
Following in the footsteps of other cyber-punk films and literature there are heavy undercurrents of William S. Burroughs personified in one of the doctors, Shimika, who is addicted to the same drugs he pumps his patients with, and in the presence of reptilian-like representatives of the mysterious organization who ultimately want to use Shimika’s addiction against him and gain control of these experiments for themselves. These echoes are literally totally drowned out by minutes and minutes on end of the howling and screaming of both patients and doctors alike as Shimika turns the tables on his enemies and unleashes his own potent (and sadistic) psychic powers on them. 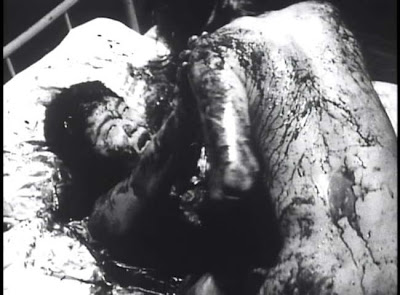 What follows is 90 minutes of graphic and often pointless depictions of arterial spray, vomiting blood, seizures, rape and disembowelment, the actual subjects of “Rubber’s Lover”. I didn’t so much watch this film as subjected myself to it because I’m not sure how anyone could enjoy this kind of brutality. It was about as much fun as nailing my own scrotum to a wooden plank. Then again (and disturbingly enough) there are people out there who probably would enjoy “Rubber’s Lover”, but I wouldn’t want to have to spend more than a couple minutes alone in a room with them, that I know. I’ll let them whip their already numbed nerve endings with this one. Count me out.
Posted by Chris MaGee at 11:23 AM