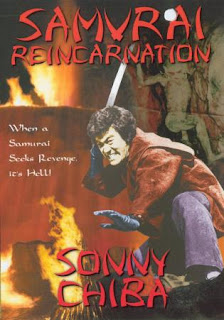 "A sword brings forth thousands of lives. It brings the souls of the dead back to life. It brings devils from hell."
After that ominous opening, "Samurai Reincarnation" opens with 5 separate episodes - each labelled "Hell". In every one, a character who cannot yet rest or is not yet ready to leave the physical world is brought back as a vengeful ghost. It starts with Shiro Amakusa who, in order to seek vengeance on the Shogun soldiers who have wiped out 37,000 Christians, forsakes God for the powers of the Devil. The next 4 episodes have him essentially building his own personal army - each of them having their own reason for needing to still be part of the human world. For instance, Musashi Miyamoto is close to death but cannot bear to miss the chance of proving he is a better swordsman than both Yagyu elder and his son Jubei (played ever so perfectly by Sonny Chiba). If some of those character names may sound familiar, then you will probably latch onto director Kinji Fukasaku's tributes to the genre throughout the film via plot points, characters and his acting ensemble.
The numerous subplots of the film do tend to over complicate things a bit and make it occasionally hard to follow; especially when the central protagonist of the story doesn't really fall into place until about halfway point. But despite this, it never forgets to keep things moving and to entertain. Lots of quick zooms and sudden explosive jumps during battle (a jump down is filmed and then reversed to make it look like a jump up) add what some may call "cheesiness" to the proceedings, but it feels like it's all part of the tribute to the style and just adds to the enjoyment. 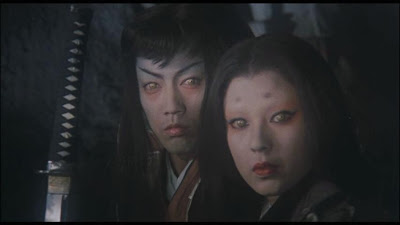 All the additional storylines and characters (the Shogun taxing the villagers, the swordsmith who is the only one who can make a sword that will kill a devil, the ghost enfatuated with a small village girl, etc.) point towards the inevitable final showdown between Jubei and Amakusa. And the fiery finale is indeed a beauty - shot completely within the walls of a burning building, the two pull out all the stops with a long extended battle. This is where those old school special effects just can't be beat as they bring so much more immediacy and excitement to them.
Fans of the 50-70s samurai films should enjoy the multiple references found here, but you don't have to be well-versed in that corner of film history in order to enjoy "Samurai Reincarnation". As long as you have your sense of fun with you you're set.
Read more from Bob Turnbull at his blog.
Posted by Chris MaGee at 10:36 AM