The ultimate "What if?" scenario! "Geisha vs. Ninja"! 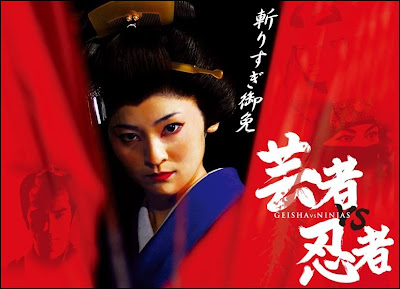 Here's one that is going to be a hit with the genre fans in North America. With the recent spate of films seemingly designed for foreign audiences like "The Machine Girl", "Metal Samurai" and "Tokyo Gore Police" the timing is perfect for Go Ohara's "Geisha vs. Ninja". Word has been floating around the net about this one since last fall, but now Nippon Cinema has news of a press conference held in Tokyo this week to herald the end of production of Ohara's debut film that's got a premise that would put most "What if?" comics to shame. Kotono, played by newcomer Minami Tsukui, is seeking revenge for her father who was murdered by a band of ninja. What follows is a battle between two of the great cultural icons of Japan: the delicate, refined geisha and the stealthy, black clad ninja.

Ohara worked previously as a fight director on Yûji Shimomura's "Death Trance" and Yohei Fukuda's "Chanbara Beauty", so we can safely assume that they'll be some good old-fashioned ass kicking featured front and center, in fact Tsukui joked that it was difficult to get through the elaborate fight scenes while wearing her geisha wig; but we'll have to wait until September to see who will come out of this momentus battle victorious... Geisha? Or ninja?
Posted by Chris MaGee at 10:32 AM