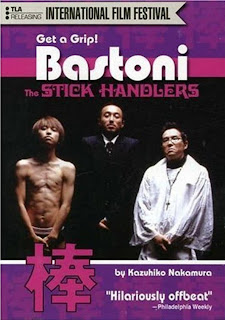 Nakamura is no stranger to the world of porn having, along with many other Japanese filmmakers, cut his teeth directing low-budget AV (adult video) films; and while you may not have heard of him you may recognize Nakamura's co-writer and co-producer on "Bastoni", Rokuro Mochizuki. Another director who came up through the world of adult films Mochizuki went on to fame both in Japan and here in North America for his multi-layered and highly inventive yakuza films like "Onibi : The Fire Within", "Another Lonely Hitman" and "A Yakuza in Love". With their combined experience they bring a wealth of understanding to the fast and dirty, low-budget world of Japanese adult films. 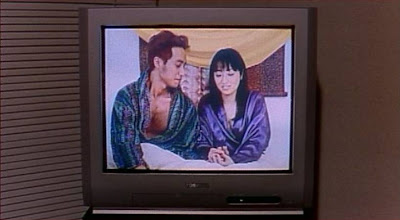 I have to be honest and say the "Bastoni" isn't that far off from an actual Japanese adult film. There is some pretty graphic content here, including a bukkake wedding scene which leaves Natsuo's face splattered with... well, you get the idea, but the similarities to real Japanese AV aren't necessarily in the plumbing on display. Unlike North American pornography Japanese adult films have always been more open to stylistic flourishes, technical innovation and at times an actual plot as long as the director includes the specified number of sex scenes and brings the film in under budget; and Nakamura brings a real artistry to what could have been something uncomfortable and sleazy. Touches like intercutting a sex scene between Ryo and a new actress with a soccer game between the two set to a salsa rhythm is just one of the examples of how "Bastoni" takes the creative brashness of the Japanese AV directors and harnesses it to tell a very human story.

While the performances (besides that of the always amazing Tomorowo Taguchi) won't have Sean Penn or Meryl Streep worrying about protecting their reputations Nakamura does create some real, honest people on screen, just people who, for betterf or worse, mediate their ideas and their emotions through sex both on and off camera. I found myself actually cheering on Ryo and Natsuo's relationship, despising Miyuki's juvenile attempts to derail it, and had my heart broken as I watched Matsunaga's family life fall apart once the nature of his job is discovered. Cheering? Despising? Heartbreak? Not the things you'd normally relate to an adult film.