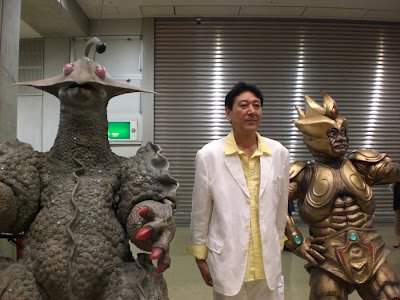 There's been a lot of buzz about Minoru Kawasaki's upcoming film "Monster X Strikes Back: Attack the G8 Summit", but the film hasn't been getting great reviews in the Japanese press. Well, I for one have to say, "Who cares!" Frankly, Kawasaki has never made good films, he's in the business of making bad ones, films that aspire for B-grade status at best and that's exactly what "Monster X" looks like: a cheesy, man in a rubber suit farce... and it stars Takeshi Kitano (or at least his voice).

Last weekend at the 23rd Annual World Characters Convention held in Tokyo Kawasaki brought the cast of "Monster X" (including actor Bin Furuya pictured above) as well as the monsters themselves to do battle for fans and luckily enough the folks from SciFi Japan were there to get some pics. Apparently the battle at the convention came to a draw, but I'm still hoping for Takemajin to pummel Guilala into submission at the end of Kawasaki's film.

Thanks to Kaiju Shakedown for pointing the way to this story.
Posted by Chris MaGee at 8:52 AM