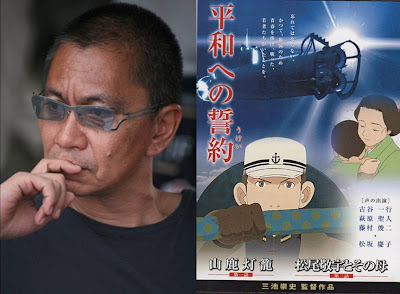 Okay, I knew that if I had a hundred bucks and I wanted Takashi Miike to direct me a short, cheap movie he'd probably do it. He's famous for never turning down a project and hey, a hundred bucks is a hundred bucks, right? But this time it looks like Miike has finally gotten in bed with the wrong people. Today Kaiju Shakedown has got the scoop on an animated film titled "A Vow for Peace" directed by the man behind "Ichi the Killer" and "Sukiyaki Western Django" and screening in the museum of the controversial Yasukuni Shrine in Tokyo. You all remember Yasukuni, right? The shrine dedicated to to the spirits of soldiers who died fighting in the name of the Emperor, including 1,068 soldiers convicted of war crimes, 14 of those being Class-A war criminals? The shrine reviled across Asia for being a symbol of the horrors inflicted by the Imperial Japanese Army on civilians in China, The Philippines, Korea and Taiwan amongst others? Yup that's the one.

The film apparently tells two stories: one about the annual Yamaga Lantern Festival in which hundreds of women dance in the streets with lit paper lanterns balanced on their heads, and the other being about Matsuo Keiu, a lieutenant in the Imperial Army who participated in the midget submarine attacks on Sydney in 1942, in fact the special CG submarine sequences in the film were created by "Always: Sunset on Third Street" director Takashi Yamazaki.

Now I know that history is written by the winners so that slight twist in events can flip villains an heroes around, but I still have to question Miike's wisdom of taking on this kind of project. At the very least you'd think that it would hurt the performance of his films throughout the rest of Asia which after the failure of "God's Puzzle" at the Japanese box office is the last thing Miike needs.
Posted by Chris MaGee at 6:27 AM