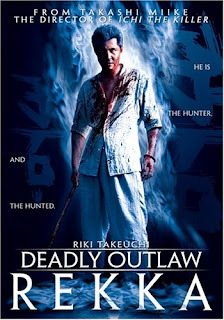 "Are you asking me to be scum?"

This is yakuza Kunisada's question to his Godmother after she asks him to accept the truce between his crime family and the one that recently bumped off his "father". Since the killing was apparently performed by two renegades, everyone agrees that it's best to leave things be - just call the truce and get on with the business. But not Kunisada. He wants vengeance. He wants to follow his code. He's also a tad criminally insane.

Though it sounds like standard gangster fare, director Takashi Miike brings his playground experimenting sensibilities to the party and creates a fun (two words - "rocket launcher"), occasionally disturbing, startling and at times surreal film. One has to think he let loose some Seijun Suzuki influence here as he uses jump cuts within scenes to fast forward the story lines and skip over obvious points or dull exposition. Of course this means the viewer has to play keep up, but when things are flying by with this much style and pace - complete with terrific music - you will likely be happy to let Miike run the show.

Can I mention the music for a second? The Flower Travellin' Band's 1971 monster progressive rock album "Satori" provides the bulk of the music and, along with its staggering riffs, a great deal of foreshadowing through the tension created by the band. Two former members of the group have small roles in the film and apparently Miike cut the film to their music then decided to keep it for the final cut. If you think prog rock is all about wanking and showing off, you haven't heard it done right. 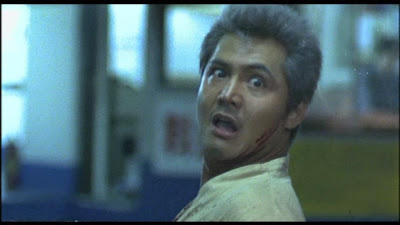 One of the film's main themes is loyalty. Knowing of Kunisada's unwavering dedication to his family's father (and his tendency to be crazy enough to blaze ahead without thinking), the entire initial killing was actually a ruse by a third yakuza family to coax Kunisada into seeking revenge. This would allow the third family to step in as a mediating body and assume control. Of course the plan also includes the rubbing out of Kunisada himself. Throughout the entire mess both Kunisada and the main renegade killer are each joined by their own sidekicks - true through-thick-and-thin loyalty. Another facet of loyalty explored is the need to protect - in this case the lovely and directionless Korean girls who make up the dream like love story that folds into the middle of the film. Though he desperately needs the love, companionship and care-giving being offered (Riki Takeuchi plays him as sometimes totally wild-eyed crazy, but also shows him as angry and very lonely), he must consider the danger into which these innocents would be pulled.

He may be crazy, but don't ask him to break his code.

Read more from Bob Turnbull at his blog.
Posted by Chris MaGee at 3:40 PM


FlowerTravellin'Band “We are here” in REVIVAL