The "Space Battleship Yamato" to launch into space again 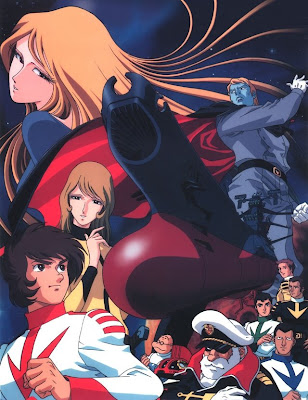 If that image doesn't bring back some memories for some of you 30-somethings who grew up in Toronto then I don't know what would. I remember getting my first taste of Japan from the programming that WUTV out of Buffalo would show after school each day. Not only did I get to see the above "Star Blazers" (the North American title for "Space Battleship Yamato"), but also "G-Force (Gatchaman)" and a ton of old kaiju films. I'm sure a lot of you remember those days as well.

Well, now it looks like we'll be reliving some of those boyhood and girlhood memories. Yoshinobu Nishizaki, the original producer of the "Space Battleship Yamato" series has announced his plans to bring the Yamato out of dry dock for one last full-length animated feature that he hopes will surpass the current success of Hayao Miyazaki's "Ponyo on a Cliff by the Sea".

Nihizaki has assembled Toshio Masuda, the directed on "Tora! Tora! Tora!" as well as the original "Space Battleship Yamato", Tomonori Kogawa who worked on the animation for the "Gatchaman" series, as well as a crew of 40 staff to bring the latest adventure of Susumu Kodai and the crew of the Yamato to Japanese theatres next year.

This time out the story will revolve around Kodai, who in the year 2220, is now a space captain and married to series love interest Yuki. They and their daughter Miyuki must board the Yamato to aid in the evacuation of three hundred million people from a future Earth threatened by an expanding black hole. I know I'll be on board for this one too!

Thanks to Tokyograph and Anime News Network for the details on this story.
Posted by Chris MaGee at 3:43 PM