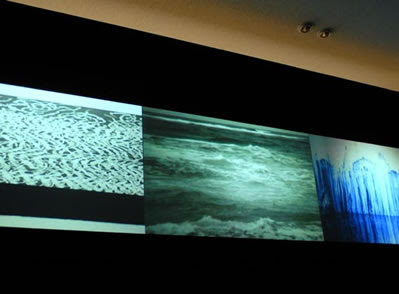 Heading back and forth to the press office at TIFF I picked up the brand spanking new fall schedule for Cinematheque Ontario. Not only does it feature the full line-up for their "In the Realm of Oshima" retrospective, but it also lists a real treat for fans of experimental filmmaking. On December 3rd at 7:00 p.m. Cinematheque will be hosting an evening with world-renowned painter, filmmaker and video installation artist Takashi Ishida.

Ishida, began making films in 1995 and has subsequently had his work featured in both solo and group shows in Japan, Spain, China, France, Austria and Canada, in fact after having received the Most Promising Young Talent Prize of the Goto Commemorative Culture Award Ishida began a one year residency here in Toronto under the auspices of LIFT, The Liaison of Independent Filmmakers of Toronto.

This special evening will mark the end of Ishida's stay in Toronto by collecting eight of his films made over a 12 year period many of which have been inspired by the fugal compositions of J.S. Bach as well as Japanese emaki or "Picture Scrolls". As well Ishida will be on hand for a question and answer session. With TIFF taking place the Cinematheque Ontario site hasn't been updated with full details yet, but for the time being make sure to check out Takashi Ishida's official website here.
Posted by Chris MaGee at 6:09 AM