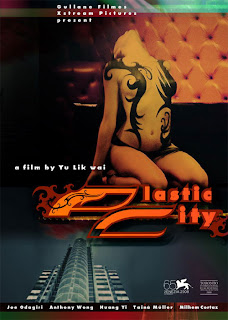 Jo Odagiri is following in the footsteps of fellow Japanese superstars like Takeshi Kaneshiro, Tadanobu Asano and Rinko Kikuchi and seems to be on the fast track to international stardom. Not only has he acted in Japanese productions that were filmed overseas as was the case with his half English/ half Japanese speaking role in Sion Sono's 2005 New York-based film "Hazard", but he's now starting to collaborate with directors from across Asia. Come this fall he'll star in Korean auteur Kim Ki-duk's latest film "Dreams" as a man who is trying to connect with his late lover through his dreams; but Odagiri couldn't go more international than his other choice of project. A French, Brazilian and Japanese co-production directed by a Chinese filmmaker, written by a Brazilian screenwriter and with a cast of Hong Kong, Chinese, Brazilian and of course Japanese actors "Plastic City" is totally global cinema.

Chinese director Yu Lik-wai, helms this, his third feature film, collaborating with playwright/ screenwriter Fernando Bonassi (Carandiru) to take us into the criminal underworld of São Paulo, Brazil where allegiances are bought and sold, friends can be more dangerous than enemies and "the goods are fake, but the money is real." Odagiri plays Kirin, the adopted son of "The King of Liberdade" Yuda (Anthony Wong), a Chinese gangster who built himself up from selling cheap trinkets on the streets in Paraguay to running one of the largest counterfeit goods operations in Brazil. If it says Fendi, Louis Vuitton, Dolce and Gabbana or any other high-priced brand name it's probably fake and it's probably come through Yuda's operation. With high level connections he brings in cargo ships full of black market goods from Asia; but he never would have thought that his "friends" in the government and military would turn on him or that an upstart gangster from mainland China has plans to flood the market with more real than real knock offs. Yuda and Kirin must survive assassination attempts, police manhunts and all out warfare in the cities slums in order to try and keep their empire together.

What sounds like your standard Hong Kong Triad film becomes a truly international pastiche in the hands of Lik-wai. This is in no small part to the director's background as the long time cinematographer for award-winning Chinese director Jia Zhang Ke (Still Life, The World). The look of "Plastic City", the cinematography, the lighting, art direction, etc. is just as important as the performances in creating the feel that we're experiencing the dark side of globalization. Lik-wai's camera flattens the visual field and uses bold, saturated colours to give almost every frame the appearance of a collage, a mash up of cultures, classes and languages. 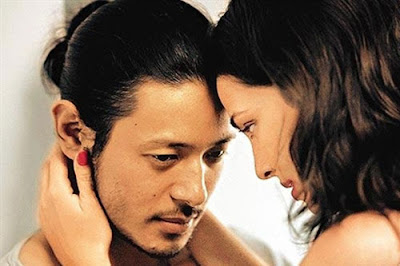 That's not to say that "Plastic City" is all flash and no substance. Anthony Wong as Yuda is the stoic central hub of the film, exuding a cool confidence, but also a seething anger at the attempts by his old allies to pick apart his operation. If Wong is the quiet center of "Plastic City" , though, then Odagiri is the charismatic young gangster up front. I had been impressed with Odagiri's work opposite Kirin Kiki in last year's tear-jerker "Tokyo Tower: Me, Mom and Sometimes Dad," but I think that in Lik-wai's film Odagri really gets to show his range. In the character of Kirin Odagiri channels the expected gangster swagger, but we can always see the hurt core of this young man who obviously loves his adopted father, but questions this life where you have no real friends and you "get rich to die young."

So, yes, from it's look through the performances by Odagiri and his co-stars and even to the propulsive soundtrack composed by Yoshihiro Hanno "Plastic City" is an impressive film, but it's not without its flaws. Being such an international stories the actors are called upon to speak Cantonese, Mandarin, English and Portuguese, but it's obvious that this wasn't an easy task. Both Odagiri and Wong have their dialogue dubbed in during long speeches which is disconcerting at first and may distance some audience members from their otherwise impressive performances.

If you're a fan of Jo Odagiri then you really should catch "Plastic City". If you're not, but enjoy a good gangster film or have followed such films as "City of God" or "Carandiru" then you may want to search out this film.
Posted by Chris MaGee at 6:11 AM