Haruki Kadokawa returns to directing after an 11 year absence 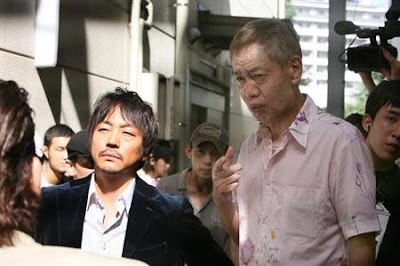 One of the most flamboyant characters in Japanese cinema, super producer Haruki Kadokawa (above right), will be stepping behind the camera for his seventh directorial effort, "The Laughing Cop", his first time helming a feature film in 11 years.

Before his three year prison sentence for smuggling cocaine Kadokawa was best known for being the producer of such box office hits as Kinji Fukasaku's "The Fall Guy" and Junya Sato's "Yamato," as well as directing the lavish 1990 period epic "Heaven and Earth," but with his Takashi Miike project "God's Puzzle" bombing at the box office and his own outrageous statements in the Japanese press (they really are outrageous... check them out) his reputation has taken a bit of a beating.

With "The Laughing Cop", a police thriller starring Nao Omori, Kadokawa hgas learned from past mistakes to move forward with his filmmaking ambitions. ""I tasted every kind of human hardship when I was in prison," he told Japanese newspaper The Sankei Sports recently, "which gave me the confidence, for the first time, to make a human drama."

"The Laughing Cop" will be released by Toei in the fall of 2009. Thanks to Variety Asia Online for the deatils on this story and Sanspo.com for the above image.
Posted by Chris MaGee at 5:51 PM