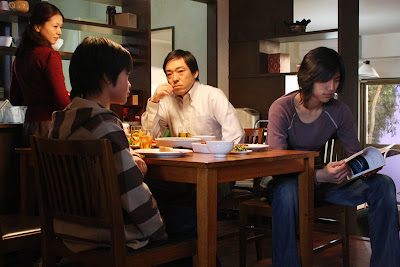 During TIFF there was the news that Maximum Films was going to be distributing Kiysohi Kurosawa's critically acclaimed film "Tokyo Sonata" in Canada. Now today word has come from Regent Releasing. With a roster that includes such hidden gems as "The Burial" Society" as well as films that should best remain hidden like the Paris Hilton starring "The Hottie and the Nottie" it's hard to say how much exposure "Tokyo Sonata" will get in theatres and on video store shelves, but any exposure is better than none.
Posted by Chris MaGee at 5:22 PM