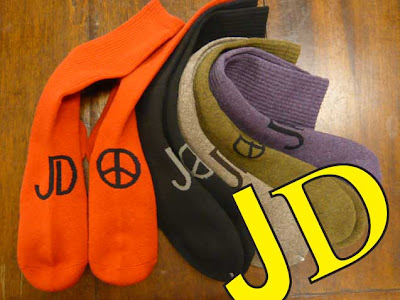 That's right. You could be wearing Tadanobu Asano's socks, or well, at least socks designed by the "Ichi the Killer" and "Mongol" star. Not just socks though. Jackets, pants, shirts, in fact an entire wardrobe because Asano has released his own line of men's fashions under the brand name Jean Diadem with items ranging in price from ¥2,940 to ¥58,800. And of course with Asano being the artsy fellow that he is you can also buy postcards and prints of his artwork, plus CDs of his music. All you have to do is check out the official Jean Diadem website.

If for any reason you don't want to order things online (you want to try them on first, you're afraid of identity theft, you're a Mennonite) and you live in New York or Los Angeles you can head to one of two Opening Ceremony stores, the exclusive retailers for the Jean Diadem line in North America. You'll have to get in line because apparently Lindsay Lohan, Kanye West and Melanie Griffith are regular patrons and they most likely have more money than you.

Thanks to Variety Japan for the story.
Posted by Chris MaGee at 5:04 PM