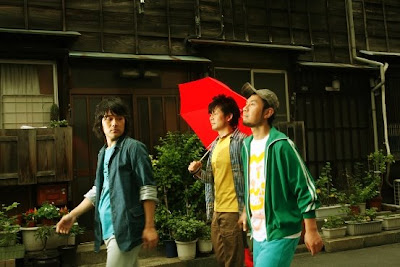 This weekend the 13th Annual Pusan International Film Festival kicks off in South Korea and amongst this year's impressive roster of Asian and international films they've put together a special programme "Music Videos by Asian Directors." There are videos by Hong Kong director/ producer Daniel Yu Wai-Kwok and Thai director Pen-Ek Ratanaruang, but Japanese film buffs will be excited to see that Nobuhiro Yamashita, the man behind the 2005 crowd-pleaser "Linda, Linda, Linda" as well as "The Matsugane Potshot Affair" and "A Gentle Breeze in the Village" is included in the line-up.

Back in 2002 he helmed the video for Japanese indie rock band Anatakikou's (above) first single "Lilly リリー" and not only is the video quintessential Yamashita, but the song is pretty catchy... actually very catchy. I had it going through my head all last night, so now I pass the song onto you. Either you'll thank me or want to kill me. Happy Friday!