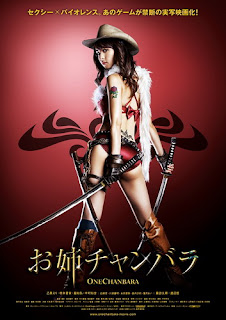 Video games as source material for films don’t generally have a good track record. With a few notable exceptions, such as Final Fantasy: Advent Children and a few Street Fighter anime films, we’re left with a festering pile of crap. Mortal Kombat is only tolerable during the Scorpion/Johnny Cage and Reptile/Liu Kang fights. Van Damme’s Street Fighter is awful. Cory Yuen’s attempt at DOA is a complete failure. Hitman was incredibly bland. Double Dragon, Super Mario Brothers, the entire Tomb Raider series, Doom, House of the Dead, Alone in the Dark, Resident Evil: all terrible, terrible films. So what made Yohei Fukuda think he could do better? Well, by making Onechanbara into a film! And what is Onechanbara exactly? It’s a videogame series featuring a sexy, samurai assassin who wears only a bikini, high heels and a cowboy hat and fights zombies! Who couldn’t make that into an amazing film?

Onechanbara, or Chanbara Beauty as its known internationally, takes place in a chaotic, apocalyptic world. Dr. Sugita (played by Machine Girl’s Taro Suwa) has unleashed a zombie plague, leaving what remains of humankind fighting for survival. Aya (Eri Otoguro from the US remake of Shutter), the bikini clad samurai, travels this zombie filled wasteland, in search of her sister. Not because she wants to be re-united with her, but because she wants to kill her. It seems their father was the head of a great samurai family and taught his skills to Aya. Saki, the younger sister, became jealous and helped bring about his death. Now Aya wants blood! She travels with a fat bumbling sidekick, Katsuji, and a gun slinging leather clad babe Reiko. Together they slay zombies and search for Dr. Sugita and Saki, who is incidentally dressed like a Japanese school girl. 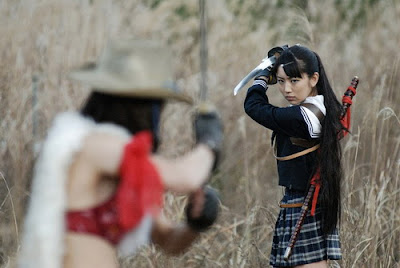 The plot sounds simple enough: Zombies, samurai swords, revenge. And that’s exactly how the film plays out: Introduction of zombies, introduction of characters, characters fight zombies, again, and again, and again. On the one hand, the film has a lot going for it. Zombies are usually popular. Hot Japanese girls wearing bikinis, tight leather outfits or school girl uniforms is always a plus. And the last third of the film is over the top and utterly ridiculous. It’s not just the endless hoards of zombies our team of heroes has to fight, but the final battle between Saki and Aya itself. It plays out more like an anime than a video game, and becomes so ridiculous, that you won’t even be able to contain yourself. Unfortunately however the film has a lot going against it, too. Up until that amazing final act, the film is pretty derivative. As a zombie film it’s pretty uninspired; it suffers from a lack of budget, and a lack of martial arts ability on Eri Otoguro’s part, and it shows cinematically. Most of the fight scenes in the early half leave much to be desired. You can tell Fukuda had a lot of lofty ideas that just couldn’t be met by the resources at hand. The film also doesn’t achieve the same level of audacity that films like Evil Dead or Machine Girl or even the trash-tastic Girls Rebel Force of Competitive Swimmers reaches. While it is amusing at times, it does quickly become repetitive, and redundant.

In the end, Chanbara Beauty is probably on par with Mortal Kombat. As a whole, it’s not a good movie. Its not very well made or well thought out, and for the most part completely unoriginal. But there is, in the end, a moment of genius, which in this case comes a little too late.

Read more by Matthew Hardstaff at his blog.
Posted by Chris MaGee at 4:33 AM