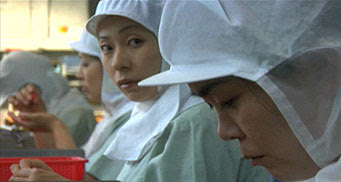 Back at the end of July Masahide Ichii sophomore feature film "Naked of Defenses" took home the top prize at the 30th Annual Pia Film Festival, but it looks like the success of this intense drama doesn't end there.

Awards were recently handed out at this year's 13th Annual Pusan International Film Festival and out of the 315 films featured Ichii's "Naked of Defenses" tied with Korean director Roh Gyung-tae's film "Land of Scarecrows" for top prize.

The film is set in and around a high-tech manufacturing plant in the northerly Hokuriku region of Japan. Plant employee Kinoshita (Ayako Moriya) is recovering from a miscarriage and finds herself both drawn to and wildly jealous of a new co-worker, Chinatsu (Sanae Konno), who is expecting a child.

No word on any kind of North American release for "Naked of Defenses" yet, but hopefully the awards it's been racking up will increase its appeal with distributors.

Thanks to Variety Asia online for the details on this.
Posted by Chris MaGee at 4:48 AM