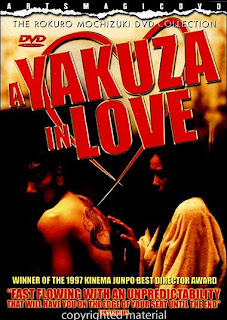 There have been quite a few despicable anti-heroes in Japanese cinema; Tatsuya Nakadai’s murderous samurai Ryunosuke Tsukue in Kihachi Okamoto’s “Sword of Doom”, Tetsuya Watari’s drug-fueled Rikio Ishikawa in Kinji Fukasaku’s “Graveyard of Honor” and almost every character that Takeshi Kitano has played from “Violent Cop” right up through to his recent “Achilles and the Tortoise”. One particularly unlikable character sticks out for me though: Kinichi Sakata, a middle-aged Osaka thug that’s been transplanted in Tokyo in Rokuro Mochizuki’s 1997 film “A Yakuza in Love”.

Kinichi has a face that looks like a fist with a mustache, the fashion sense of a lounge lizard, the fingernail on his pinky is grown out into a coke scoop, and you get a strong feeling that he’s dowsed in cheap cologne to cover up some nasty B.O. He’s definitely not the kind of guy you think of as a romantic lead, but nonetheless that’s what he is. During a stake out of a rival yakuza’s headquarters he spies Yoko, a beautiful and innocent college girl working as a waitress in the café across the street and it’s love at first sight (at least for Sakata), but Mochizuki is definitely not going for the usual “beauty and the beast” scenario with this film. Sure, Kinichi attempts to woo Yoko with sweet talk and the gift of a pair of expensive leather pumps, but there’s not a sensitive, artistic soul hiding under the gruff, tattooed exterior. Nope. Kinichi’s first date with Yoko goes like this: wine and dine the pretty girl, who’s actually kind of afraid of Kinichi, and then when she goes to the washroom spike her champagne. That’s right, he drugs her, date rapes her and the next morning she nearly dies from a combination of all the speed she’s ingested and a weak heart. What a charmer! To make it up to her he takes her to the doctor… in Osaka . Well, he basically kidnaps her and the rest is rainbows and cupids.

Okay, the rest is definitely not rainbows and cupids. Yoko finds herself in the middle of a yakuza turf war after Kinichi tries to off Kamewada, the vicious new gang boss in Osaka . Add to that that Yoko soon discovers that she’s stuck with a champion shabu (speed) fiend, one who likes to work out all his drug-induced aggression with his fists, and you have a recipe for disaster… or do you? While “A Yakuza in Love” isn’t the traditional “beauty and the beast” type of love story there is another analogy you can draw: The Stockholm Syndrome. How else can you explain how sweet little Yoko could fall for such a brute?

At this point in the review you’re probably saying to yourself, “Well, Chris didn’t like this one at all,” but nothing could be farther from the truth. I really liked “A Yakuza in Love” and here’s why. The yakuza genre is all formula. Any Japanese film fan knows that. Mochizuki is one director who’s probably produced some of the best contemporary yakuza eiga, but even the two films that preceded “A Yakuza in Love” 1995’s ‘Another Lonely Hitman” and 1997’s “Onibi: The Fire Within” followed the general cookie cutter template of a lone gangster who’s released from prison, hooks up with a prostitute with a heart of gold and single-handedly goes up against the perceived corruption and dishonorable behaviour in his old gang. With this film though Mochizuki really cements his reputation as one of the most important yakuza eiga directors by introducing entirely new elements to the genre: an anti-hero with a drug-induced split personality, a cross-dressing assassination scene, a female character who ultimately stands toe-to-toe with hardened gangsters and yakuza clan leaders that provide just as much comic relief as they do action. Plus the performances by Eiji Okuda as Kenichi and Yuna Natsuo are immensely watchable, maybe sometimes bordering on the voyeuristic due to the harshness of the subject matter, but immensely watchable nonetheless.

Does the innovation of "A Yakuza in Love" forgive its often cruel subject matter? That would be up to individual viewers to decide, but all I can personally say is at its start I thought I knew where the film was going, but I’m happy to say that even if it can sometimes be a ride that makes you squirm and shake your head it’s a ride that fans of yakuza films won’t soon forget.
Posted by Chris MaGee at 4:51 AM