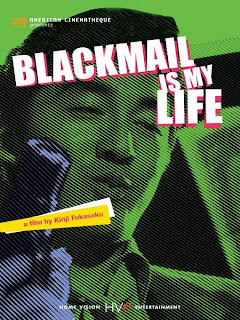 You want cool? I’ll give you something cool!

A gang of nobody punk friends are living at the bottom of the food chain during Japan’s 1960’s social and financial reconstruction. Their leader Shun (Hiroki Matsukata) is cleaning toilets in some dive when he overhears a couple bootleggers talking about the fake scotch they’re serving at the bar. They catch him eavesdropping and try and pay him off with a few thousand yen, but Shun’s more expensive than that. For his trouble he gets beaten to within an inch of his life, but his gang of friends decide that they can get revenge and turn a fast profit at the same time by exposing the dirty dealings going on in the bar. This starts them on their path as a pack of small time blackmailers climbing the criminal ladder in Kinji Fukasaku’s 1968 “Blackmail is My Life”.

I say cool because this film is pure 60’s pop-art from start to finish and has more in common with the early films of Seijun Suzuki and his protégé Yasuharu Hasebe than the hard hitting and angry yakuza films that Fukasaku would later become famous for. As sauve yet goofy Shun, his good buddy Seki (Hideo Murota), half black boxer Zero (Akira Jo) and beautiful, spunky Otaki (Tomomi Sato) take on bigger and bigger criminal fish, from porn filmmakers to small time gangsters, Fukasaku pulls out all the stops, filling the screen with garish cherry red sports cars, fiery explosions, ultra-hip mod music, fast editing and freeze frame effects that will leave your head spinning... spinning just enough to distract you from the meandering and sometimes implausible plot twists and cobbled together clichés from other crime/ yakuza pictures. (Those fans of Seijun Suzuki will recognize the tune that Otaki is constantly whistling immediately.)

Still there is some glimmer of the future Fukasaku because what we have here is essentially an underdog story, the little guy that comes from nothing to take on the powerful and corrupt until he’s just as powerful and corrupt as they are. In the case of “Blackmail is My Life” though Shun never reaches those lofty heights; when his gang goes up against the king of all blackmailers who has a document that could bring down the Prime Minister Shun just gets a bit too greedy and this could be his downfall.

If you want bright colours, hip music and a jolt of excitement, then don’t mind the thin plot, just sit down and enjoy an early film by one of Japanese cinema’s masters.
Posted by Chris MaGee at 3:54 AM