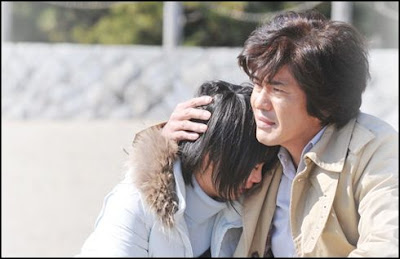 Talk about cross-marketing. Word has come down today at Tokyograph that Koichi Sato's upcoming police drama "Daremo Mamotte Kurenai (Nobody to Watch Over Me)" will not only premiere in Japanese theatres on Januray 24th, but that a tie-in TV special titled "Daremo Mamorenai (Nobody Can Defend)" will air on Fuji TV on the same day.

"Daremo Mamotte Kurenai", which took home the Best Screenplay Award at this year's Montreal World Film Festival, tells the story of Katsuura (Koichi Sato), a police detective who takes a murder suspects younger sister (played by Mirai Shida) into his personal custody both to protect her from the media onslaught surrounding the case as well as so he can gain information about the murder. It co-stars Ryuhei Matsuda as Katsuura's partner, and "Daremo Mamorenai" will focus on their investigation as well as the family of the victim.

Check out the official site for "Daremo Mamotte Kurenai (Nobody to Watch Over Me)" here and the teaser trailer for the film below.