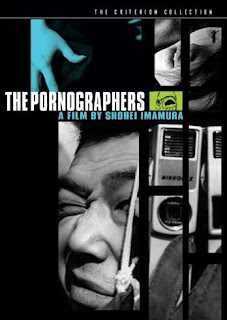 While Ogata provides what he describes as "social welfare" his own home life is in danger of slipping into that chaos that he believes his films try to keep in check. He and his common-law wife Haru (Sumiko Sakamoto), a middle-aged hairdresser, are struggling to keep their family together. Koichi (Masaomi Kondo), Haru's eldest son and object of her almost unsavoury motherly love, wants nothing more than to move in with his college buddies and leave Haru and her creepy pornographer boyfriend behind. Meanwhile Ogata is having trouble coming to terms with his maturing step-daughter Keiko (Keiko Sagawa) and quickly crosses the line between parental love and parental abuse. If that's not bad enough on it's own Ogata is also on probation for obscenity charges, is trying to fend off the local yakuza who want a piece of his business and Haru's belief that her late husband has been reincarnated as a carp that she keeps in an aquarium at the head of her bed as well as her frequent hysterical illnesses are quickly progressing into all out insanity.

Pornography, incest, delusions, insanity. In some ways "The Pornographers" plays out like a traditional shomen-geki family drama on acid. Director Takashi Miike would famously explore this same territory in his 2001 taboo breaker "Visitor Q", but Imamura's goal with his film isn't to shock, but to pose one of the main questions that continues through his filmography: Can we reconcile our basic animal nature with the laws and codes of modern society?

The novel by Akiyuki Nosaka that "The Pornographers" is based on seems tailor made to this line of inquiry and the film's original Japanese title, "Erogotoshitachi yori Jinruigaku nyumon (An Introduction to Anthropology through The Pornographers)", is really the skeleton key to its interpretation. In scene after scene Imamura and cinematographer Shinsaku Himeda, who also worked on Imamura's "Pigs and Battleships" and "Intentions of Murder" shoot the characters through windows and glass dividers as if Ogata and his family are, like Haru's beloved carp, trapped in an aquarium like some fascinating animal life or debased form of humanity. It's a very effective way of distancing the audience from what could have otherwise been some truly disturbing subject matter; and it's only late in the film after Haru has been committed to a mental hospital and Ogata's step-children finally cut the apron strings that Imamura takes Ogata out of his aquarium and sets him off on the ocean. Liberated from societies restrictions he's free to create the ultimate form of pornography, a process that will ultimately consume him.
Posted by Chris MaGee at 3:28 PM