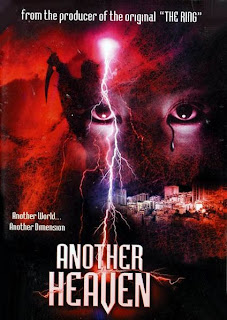 If I've mentioned the harsh taskmaster ways of our Editor-In-Chief before, it's because Chris can get a bit power hungry with the rules sometimes ("Hardstaff, get a shave!" he bellowed the other day). Though the J-Film Pow-Wow offices are actually a great place to work (plush couches, catered lunches, inter-department hockey games, etc.), we do have restrictions. Aside from these archaic things called "deadlines", the most difficult rule to follow sometimes is the length of a review - "Minimum 400 words or you're back on the street Turnbull!".

Now 400 words isn't so difficult to reach when you're passionate about the film in question - whether it's love or hate, it doesn't take too much effort to spill out your feelings regarding something about which you feel strongly. But what about those films that instill a powerful sense of ambivalence? Well, I guess you start by describing the plot...

"Another Heaven" is the story of a set of serial killings and the young detective trying to solve them. There's something a bit different about these killings though...During the first crime scene investigation at the outset of the movie, it's discovered that the brain of the victim has disappeared. It suddenly dawns on the large team of officers on site that perhaps the pork stew simmering on the stove may not actually be pork stew. Before they have time to digest the situation, the police find further strange cuisine at several other murder sites. Meanwhile we meet the three main detectives: the tall young handsome one who invests himself heavily into the case, the gruff older one and the calm, wise one who is about to retire. The rest of the detectives seem utterly incapable of doing anything but looking repulsed by all the strange foods they've found or just simply randomly yelling. We also get to meet the young detective's girlfriend - a somewhat annoying woman who pretty much thrusts herself into his life (though he doesn't really do much to stop her). And then we meet the killer - and things take a supernatural turn. 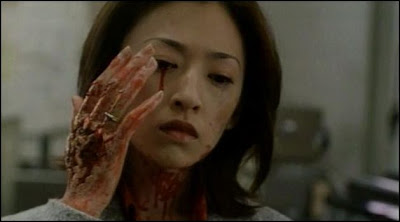 There's nothing wrong with that last plot point per se, but two things hold the story back from being terribly interesting: 1) once you've set up a realistic world and then suddenly allow your main villain the ability to do whatever it wants whenever it wants, you lose a bit of the tension; 2) the supernatural element doesn't actually bring much else to the story or the pace of the film. There are some neat touches towards the end of the film, but they kinda get lost in a bit of cheesy effects and thematic exposition (ie: "it's now time to tell you what the film is really about..."). There's also a couple of funny moments involving the gruff cop, but those are offset by all the times we have to see the rest of the bumbling squad as well as some timing issues with when the comedy occurs. As well, director Joji Iida foreshadows a few events in pretty clever ways, but the payoffs are never quite what they should be. That's kind of how the film goes - decent moments are offset by not-so-great moments.

The film is overly long at 130 minutes, but I never really felt the need to turn it off. There's certainly far worse things you can say about a movie, but it's no ringing endorsement. Ambivalence rarely is.

Read more from Bob Turnbull at his blog.
Posted by Chris MaGee at 3:16 PM