The full English voice cast for "Ponyo" has been confirmed... or has it? 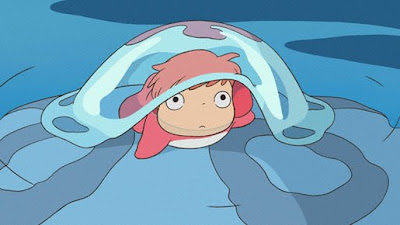 Word spread like wildfire online yesterday after Ghibli World ran what they were saying was the full voice cast list for the English-dubbed release of Hayao Miyazaki's latest animated blockbuster "Ponyo on a Cliff by the Sea". Set for a limited theatrical relase in North America next year Ghibli World reported that Matt Damon, Tina Fey, Cate Blanchett, Liam Neeson, Lily Tomlin, Betty White, Fankie Jonas, Noah Cyrys and Cloris Leachman will all be providing voices for the characters.

But has this been officially confirmed by the folks at Walt Disney, the North American distributors of the film? Apparently not, according to the folks at Anime News Network. They were reporting that the Ghibli World report was only based on rumours coming out after a test screening of the film that was held in Pasadena on Monday and that no official word of the voice cast had been confirmed.

Rumours?! On the internet?!?! I can't believe it! Sounds to me like Anime News Network, one of the premiere sites for information about anime and manga online has a case of sour grapes after having had someone else get the scoop on this major story. Yes, we'll wait for official confirmation from Disney on this, but I'd certainly let a bit of money ride on the fact that these are the voices that we'll be hearing from Ponyo and the gang next year.
Posted by Chris MaGee at 5:06 AM