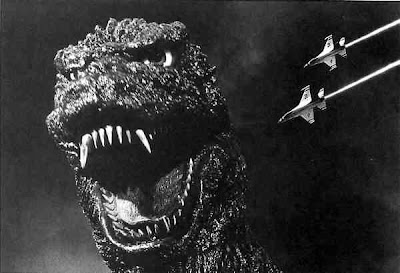 Earlier this month academics from across Japan, and some from around the world, gather at the Shizuoka University of Welfare in Yaitsu, Shizuoka to engage in serious scholarly discussions about Godzilla. I hear some snickers out there, but hold the jokes for a second while I explain.

It was on March 1st, 1954 that the tuna fishing ship Daigo Fukuryū Maru set sail from Yaitsu and into history. While at sea the ship and its 23 member crew were exposed to nuclear fallout from the U.S. atomic testing taking place in Bikini Atoll. The ship's chief radioman Kuboyama Aikichi succumbed to acute radiation poisoning a year and a half later.

Of course fans of Ishiro Honda's original "Gojira", which was released only 8 months after the Daigo Fukuryū Maru, used this incident as inspiration for the film's opening scene in which Godzilla attacks a fishing boat off the coast of Japan. Honda had said on numerous occasions that he'd always intended to have the story of Godzilla be an allegory for nuclear weapons and it's this aspect of the film(s) that were discussed at the Godzilla Summit.

The Bikini Citizens Net Yaizu citizen's group and the University's President, Kato Kazuo, told participants that "Godzilla was the symbol of the dread of destruction caused by nuclear weapons, but has since become a guardian deity protecting global peace and the environment," while Prof. William A. Tsutsui from the University of Kansas spooke at length about how "the Godzilla films can provide us valuable insights into Japanese culture since World War II.”

I've often said that the original "Gojira" is one of the most powerful anti-war films I've ever seen, o it's good to see that there are people out there approaching Godzilla in this light as opposed to a silly man in a rubber suit.

Thanks to Ampontan for the story.
Posted by Chris MaGee at 5:04 AM