Robots acting opposite humans onstage in "Hataraku Watashi (I, Worker)" 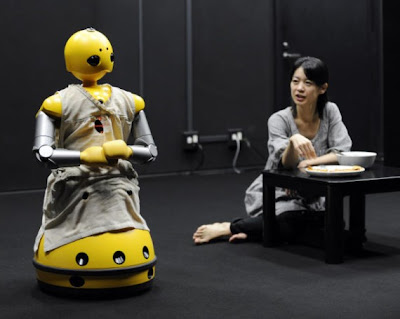 I can hear the complaints from the actors now: "I have zero chemistry with my co-star, zero! I'm giving my all and I get nothing back. Have you ever tried to do Meisner exercises with a vending machine? Well, this is the same thing. If I wanted this kind of misery I'd go work on a George Lucas movie..." Okay, I'm kidding, but while film actors are now routinely asked to give their all while acting opposite animatronic models, latex puppets and more and more frequently nothing but a green screen to be filled with characters and settings in post-production the theatre has been a bastion of real emotion, real interaction between actor and audience... and real co-stars. That is until now.

Veteran Japanese playwright Oriza Hirata has mounted a production of a 20-minute short play at Osaka University entitled "Hataraku Watashi (I, Worker)" which features robots performing opposite human actors. Mitsubushi provided the robots for the production, but it's been up to the university's computer engineering department to porgram them to move and deliver their lines along with the actors. Set in an unspecified future in which robots have taken on all the daily tasks that humans no longer want to perform, that is until a young couple is faced with a household robot who suddenly loses it's motivation to work. Hirata has explained that "Hataraku Watashi" is about humans relationships with technology and he hopes that the play can be expanded to a full-length work by 2010.

Despite the obvious difficulties the actors must face working opposite machines "Hataraku Watashi" sounds like a fascinating concept, but one that is hardly new. I couldn't help but think of Karel Čapek's stage play "R.U.R. (Rossum's Universal Robots)" while reading about "Hataraku Watashi". Written in 1921 "R.U.R." focuses on the rebellion of artificial human beings on an island factory. The word "robot" in fact had its origins in Čapek's play, having been derived from the Czech word "robota" or "labour". It seems like things have gone full circle in the world of live theatre.

Thanks to the BBC for the details on this new revolution in theatre.
Posted by Chris MaGee at 5:02 AM