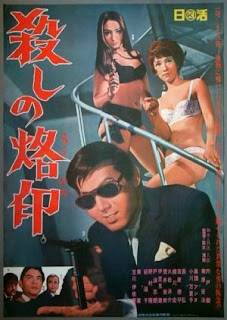 My son was working on a math problem the other night and as he was doing one particular sum, he was talking it through out loud. He moved from left to right (from the hundreds to the ones instead of the other way around) and said things like "now if I add 20 here...". I could see the progress he was making, but his individual steps didn't make sense to me. In the end, he came out with the right answer. Somehow he still got from 'A' to 'B' - it's just that he happened to stop by 'Z' on the way...It reminded me a bit about one of my favourite films from the 1960s.

What Seijun Suzuki does in "Branded To Kill", his last film with the Nikkatsu studio before they fired him and he became a director without a home for a decade, is play with the form and structure of typical narrative filmmaking...The plot and storyline still come across, but the images aren't exactly what you would expect. They may not even make logical sense. However, they provide enough information to keep you moving through the story without having to always fall back on long bits of exposition or narration. After so many years in the studio system making B picture after B picture, you can't blame Suzuki for trying different things by experimenting and tinkering with the parameters of telling stories. He had been warned after previous films that if he didn't toe the line, he would be gone. I expect Suzuki had his walking papers within the first 10 minutes of the first studio viewing of "Branded To Kill". 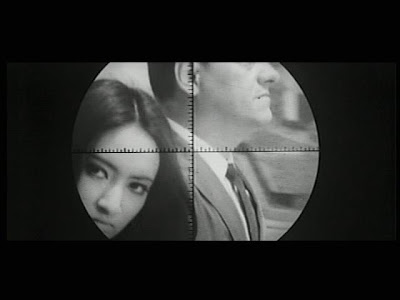 If you give in to its images - let them tickle your brain for awhile - the story just kind of flows out of them. Jo Shishido (who looks like he has orbs stored in his cheeks) plays Hanada - an organized crime killer who becomes a target of his peers after failing an assignment. He's been looking to reach the pinnacle of his profession (he's currently the No. 3 Killer in the organization), but no one knows who the real No. 1 Killer is and now that others are trying to kill him, it's making it that much harder. Further complications are the women in his life - his wife who despises him (but is crazed for sex) and the mysterious woman who brought him the assignment that he bungled. He just can't shake thoughts of the latter and he becomes almost as obsessive about her as he is about the smell of boiled rice. He doesn't need a shot of Scotch to calm down, he just needs to get out the rice cooker and inhale its vapours. It's odd character details like these that add so much more to the enjoyment of the story. These aren't just randomly assigned "quirks" - they flesh out these people and tell us more about their personalities. And the actors are perfect for their roles: Shishido working his way from cool to crazed, Anne Mari as the icy object of Hanada's obsession and Mariko Ogawa as Hanada's loony wife.

Though the film is compelling enough just as an exercise in deconstructing Suzuki's techniques, it's also a solid piece of genre entertainment. Loads of fun actually. The 'B' movie yakuza plot is filled to the brim with those interesting character moments as well surprising devices used to impart information. There's a terrific sequence during which Shishido's killer takes care of three separate jobs in highly innovative and creative ways (he is No. 3 after all) - using a huge billboard lighter as cover, shooting a victim through a sink drain from basement pipes and escaping on top of a hot air balloon are all tricks up his sleeve. And it all happens within a frame that's constantly shifting perspectives, angles and timelines while also remaining filled with interesting scenery, sets and props. By the end of the film, rooms filled with butterflies, a boxing ring and torrential rain showers have all played parts in what could pass for a swirling fever dream in the mind of Hanada.

Who says stories have to be told in a straight line? Or math problems for that matter.

Read more from Bob Turnbull at his blog.
Posted by Chris MaGee at 3:45 PM