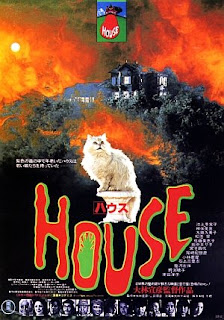 Slasher films are a dime a dozen. Young men and women have been waylayed, lost and detoured in backwater towns, after their senior proms and on camping trips only to be sliced, diced and mangled by a gallery of some seriously sociopathic baddies. In Nobuhiko Obayashi's 1977 horror film "House" the formula is revamped by having the all female cast go up against a female killer, in fact one of the girl's very own aunt. Now that's cold!

Oshare and her six school friend's are bubbling with anticipation on the eve of their summer vacation, but when their plans to stay at a teacher's cottage fall through Oshare comes to the rescue by suggesting another venue for their summer fun. It turns out that even after 8 years poor Oshare is having a hard time coming to terms with the death of her mother and an even harder time adjusting to her father's new fiancé, Ryoko; so as a way to escape her unhappy home she along with her creatively named friends (Fanta, Melody, Sweet, Mac, Gari and Kung Fu) head out of town to spend their vacation with Oshare's aunt, a piano teacher who lives in a big rambling old house. By way of a little exposition Oshare's aunt and mother both loved the same young man when they were teenagers, a handsome pilot in the Japanese Army who ended up dying in battle. Oshare's mother moved on, but her aunt did not so when the vacationing girls come knocking on her door they (and we) find an eccentric older woman along the lines of "Great Expectations'" Mrs. Haversham: wheelchair-bound and living only with her dreams of what her life could have been had her true love survived the war. Oshare and her friends quickly set about cheering up her aunt, but shortly thereafter strange things start happening in the house and one by one the girls begin to disappear. What's happening? What can explain Oshare's strange visions of her mangled friends? Why is her aunt suddenly able to walk? Could this be her doing, or that of the house itself? 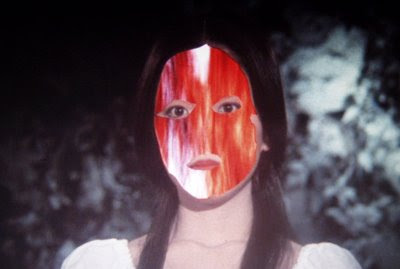 It's this combination of the traditional slasher film in which the young people get picked off one after the other with the "young high school girls vs. the mature evil women" formula of such manga and anime as "Sailor Moon" and "Cutie Honey" that sets "House" apart, at least in terms of plot, but it's not the plot that makes "House" so special... so very, very special. Obayashi, who began his filmmaking career working on short experimental and commercial productions takes the plot device of a haunted, killer house (one that was apparently suggested to him by his children) and runs with it, throwing every movie-making technique in the book at it resulting in a film the likes of which I'd never seen before. I have to admit that I've never dropped acid, but I can only imagine that it might feel something like watching "House". Pinholes fades, wipes, superimposed photography, matte paintings in front of theatrical painted backdrops, split screen, Obayashi uses it all... and that's even before we get to Oshare's aunt's house! Once there things really go off the rails with Obayashi along with his cinematographer Yoshitaka Sakamoto and his editor Nobuo Ogawa creating hallucinatory sequences that left me uncertain whether I should be terrified or delighted. The scene in which Oshare's friend Melody is eaten by a piano (yes, you heard that right) is unlike anything I've seen in a feature film.

Some critics might call "House" an exercise in style over substance, that it takes a tired horror film cliche and wraps it up in psychedelic effects, but these people would be missing the point. Not only in Japanese film, but in theatre, pottery and literature, the form is the function. How something is packaged and presented is just as important, and in the case of "House" possibly more important, than what's in the package itself. Author and critic Donald Richie explained it by saying that Japanese cinema is "presentational" as opposed to the West's "representational" cinematic aesthetic, meaning that it doesn't purport to be a mirror of reality, but an often abstract interpretation of it... and frankly, you can't get more abstract than "House".

Why this film didn't get released at the height of the J-Horror craze is beyond me. "House" is just as revolutionary as Masaki Kobayashi's "Kwaidan" or Nobuo Nakagawa's "Jigoku" both of which have been put out by the fine folks at the Criterion Collection with their usual attention to clarity and detail. When I heard that "House" had been acquired by them years ago, but had yet to be released I was dumbfounded. I had to watch what I would easily describe as my new favorite Japanese horror film in bite-sized chunks on YouTube, hardly an ideal situation for this utterly amazing film. Criterion! Get with it and get this film to cinema lovers soon!
Posted by Chris MaGee at 3:41 PM

I watched that piano death scene on YouTube as well...Damn, I want this film on DVD right this second. I didn't watch anymore of the clips, but I may have to...

I can just imagine seeing this in proper size and colour.

It's so weird that this came out almost at the exact same time as Suspiria... Obayashi and Dario Argento must have been dropping the same batch of acid.

I saw this just a couple of weeks ago on the Encore Mystery movie channel... Although the special effects are dated, the film is almost more charming than it is horrifying, and I'm sure a lot of recent Asian horror (since the mid 1990s anyway) has been influenced by it. Like Memento Mori, for instance.