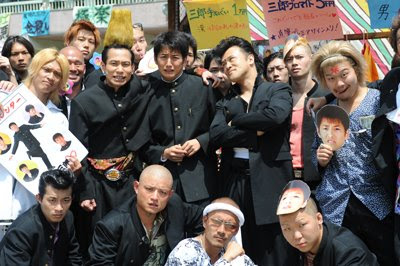 Since back in July when it was announced that "Battlefield Baseball" and "Meatball Machine" director Yudai Yamaguchi was going to be helming a big screen version of the TV Tokyo manga-based TV series “Elite Yankee Saburo” I've kept an eye out for any images or footage to share with you, but nothing much had leaked from the production but a cast photo.

It seems that situation is beginning to change. Images from the film set for release in the Spring are starting to appearing online. I would have said "leaked" online, but when things start showing up at Yahoo Japan and Tokyograph you know that these aren't images taken off someone's cellphone.

First up is the above image of, yes, the cast of the film (courtesy of Yahoo Japan, but this time taken from the film itself. It's mirrored again over at Cinema Topics Online along with another image of the film's villian. The big news that's coming out with these images, though, is that popular actress Yukie Nakama (I Want to Be a Shellfish, Shinobi: Heart Under Blade) will be playing the role of a nun... and a hot nun at that. Just check out the pic that they have posted of her over at Cinema Today to see what I mean.

Are all these images heralding the imminent release of the "Elite Yankee Saburo" trailer? I'd certainly hope so...
Posted by Chris MaGee at 5:14 AM