REVIEW: Breath In, Breath Out 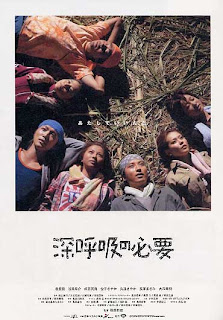 Okinawa is part of Japan but it also stands apart from the rest of the country. The islands that make up Japan's southernmost prefecture are not only physically separated from the mainland, but are also separated by language, culture and history. It wasn't until the early 16th-century when that Okinawa became a part of greater Japan, and centuries later Okinawa was occupied by American forces from 1945 to 1972, two decades longer than the rest of the country. To this day there is still a strong U.S. military presence there. All of this has left many Japanese to view Okinawa as a sunny, green and blue foreign land, a place to relax, to explore and in the case of Tetsuo Shinohara's 2004 ensemble drama "Breath In, Breath Out," a place to escape to.

At the end of February five very different urbanites arrive in the tropical heat of Okinawa to stay for a month on a sugarcane plantation. There is pleasant twenty-something office temp Hinami (Karina), spoiled 25-year-old Estuko (Sayaka Kaneko) who tries her best to look 19, quiet but conscientious Shuichi (Shosuke Tanihara), sullen and often surly Nishimura (Hiroki Narimiya), and high schooler Kanako, a girl who's so withdrawn as to be almost mute. The elderly couple who run the plantation, the Tairas, rely on groups like these to help them with their annual harvest, so we Canadians can think of this as a working holiday on par with going tree planting in the North. There won't be any lounging on the beach for these tourists. As explained by Yutaka (Nao Omori), the handsome young drop-out who works as a labourer for the Tairas, these five will have to work a 6-day week stripping and threshing what seems like an endless field of sugarcane stalks. Up at dawn and then out in the sun from 8:00 to 6:00, there isn't time to joke around and gossip. Taira-san and his wife will depend on them to harvest the crop in a month to make sure it gets to market, but the group doesn't seem to mind, none of them (except maybe Etsuko) seem to be in a talking mood, in fact Shuichi, Nishimura and Kanako act as if they're hiding something. It doesn't matter, Yutaka and Taira-san let them know. As long as they work hard and try and enjoy themselves they "don't have to say what they don't want to say." 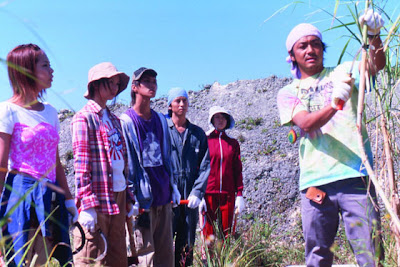 It was this phrase that's repeated often during "Breath In, Breath Out" that initially frustrated me about the film. It is obvious that these five people have pasts, things on the mainland that they are running from, but Shinohara and screenwriter Yasuo Hasegawa don't give us any real any indication as to what exactly these are. We just get to watch each of them stumble through learning how to harvest the sugarcane, their methods and proficiency giving glimpses of their personalities: Hinami's methodical stripping of the stalks, Shuichi's muscular cutting and hacking, Kanako's at first tentative movements, almost as if she's uncomfortable in her body. For their part Etsuko and Nishimura are the real klutzes of the group, with Etsuko spending more time guzzling water than working and Nishimura seemingly unable to follow Yutaka's simple instructions.

I suppose that I'm still used to the straightforward storytelling formulas from the Hollywood films that I grew up on; that when someone has a secret that the whole point of the film is to reveal it, and in the case of a painful past to reveal it in big, tearful cathartic moments, but not so here... at least not at the beginning. Eventually I stopped fussing and succumbed to the quiet, deliberate pace of the film, and I'm glad I did. Shinohara provides some truly beautiful moments, like Shuichi and Hinami taking a walk at dusk from the island's one corner store back to the farm and on another day sitting on the sea wall staring out at the ocean, shot in such as way as to be a very nice visual nod to Japanese cinematic master, Yasujiro Ozu. The film became so quiet and deliberate that when clues at to people's pasts began to surface (the photo that Shuichi carries showing him in a white doctor's coat, Kanako's scarred wrists) that they almost felt a bit intrusive, and when the five began to start saying the things that they didn't initially want to say "Breath In, Breath Out" made a major shift into a feel-good melodrama.

If you're looking for a film to lift your spirits, and you don't mind feeling like you're watching an outward bound team-building exercise, then "Breath In, Breath Out" will work quite nicely for you, but if you hate watching a film that likes to emotionally manipulate the audience then you'd best steer clear.
Posted by Chris MaGee at 3:49 PM