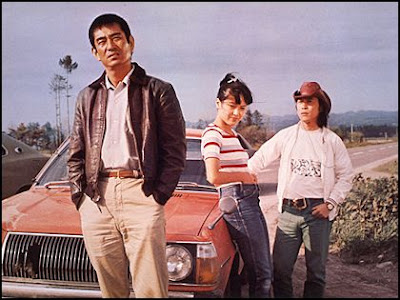 Indian-American filmmaker Udayan Prasad has shifted the story of an ex-con who hitches a ride with a young couple on his way home to reconcile with his estranged wife from Hokkaido to post-Katrina New Orleans. Stepping into Ken Takakura's shoes is Academy Award winner William Hurt and playing Hurt's wife is the wonderful Maria Bello. Rounding out the cast are Kristen Stewart and Eddie Redmayne as the young couple who accompany the ex-con on his journey.

The film just had it's premiere in Los Angeles on November 25th after having made stops at this year's Sundance Film Festival in January, the San Francisco International Film Festival in May and finally the Deauville American Film Festival in September. The critical reaction has been mixed and can be summed up by The Hollywood Reporter's Kurt Honeycutt's video review below, but Prasad has to get points for barvery for taking on a film that originally won six Japanese Academy Awards including Best Film, Best Director for Yoji Yamada and Best Actor for Ken Takakura.

Thanks to Hoga Central for shaking me awake about this story.