REVIEW: Battles Without Honor and Humanity: Deadly Fight In Hiroshima 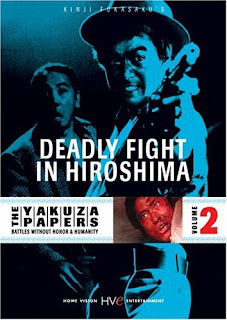 In part 2 of Kinji Fukasaku's epic yakuza tale "Battles Without Honor Or Humanity", the director follows a very similar structure and path as the initial film: loads of characters, sudden violence, a fast moving plot and energetic camera work. The editing also makes effective use of freeze frames for introductions to the array of characters (as well as their "exits" from the story). In "Deadly Fight In Hiroshima", Fukasaku also emphasizes a specific theme - mindless sacrifice without worthy cause.

The story opens in 1950 in Hiroshima. It's 5 years after the end of WW II, the Korean War has just begun and many parts of the city still lie in ruins. We reconnect with Shozo Hirono (our "hero" from the first film) who is still doing time in prison for murder and we also meet a new character named Shoji Yamanaka. Shoji has just arrived in prison after assaulting numerous people in a gambling hall with a knife. He's quick to anger, makes rash decisions without thought of consequences and has nothing to lose. In short, he's like just about every other male character we've met in the series so far. But he gains our sympathies (and Shozo's too) - if only because of his wide-eyed lost expression - and two years down the road he is released on parole. He immediately gets into more trouble after meeting the niece of yakuza family head Muraoka and getting beaten to a pulp by Katsutoshi Otomo (a crazed Sonny Chiba) and his goons. The niece Yasuko (played by Meiko Kaji - less intense than in her more famous roles as Female Prisoner Scorpion or Lady Snowblood, but no less beautiful and strong) is sympathetic to Shoji's plight, saves his life and manages to help get him into the Muraoka family. 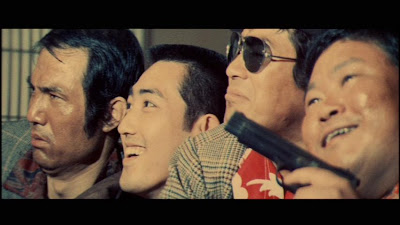 The film is just over 10 minutes old at this point and there's no slowing down as the plot continues to unfold at the same rapid pace. Shoji and Yasuko fall for each other of course, but it's complicated by the fact that her husband was a Kamikaze pilot and it would dishonour his memory if she were to remarry. After being disciplined for failing to know his place, Shoji gets back into the good graces of Muraoka after he kills a construction boss which allows him to become a true member of the family. By the time we hit one of the main conflicts of the film, we've reached 1955 and the yakuza power has grown along with a "new breed of violence". Revenge killings, power plays and sacrifices for family honour all contribute to the carnage that follows throughout the rest of the film. When the violence occurs, it's usually quick and typically not well thought out.

Most of the killings which occur to preserve family honor are really done to preserve the men in charge. Fukasaku does a great job in tying the pointless yakuza violence to the memories of the Kamikazes from the war - soldiers sent out to do the bidding of their leaders at the expense of their own lives. Even Hirono (as head of his own new family) delegates one of his men to take the blame and jail time for one of his own killings. By the end of the film, after countless more deaths, it appears that Hirono may actually be wrestling with the point of it all.

Fukasaku isn't wrestling with it though - he has a pretty clear idea of the pointlessness of all the violence. And he leaves the viewer with a final reminder of the sacrifice that Hiroshima itself gave...

Read more from Bob Turnbull at his blog.
Posted by Chris MaGee at 4:05 PM