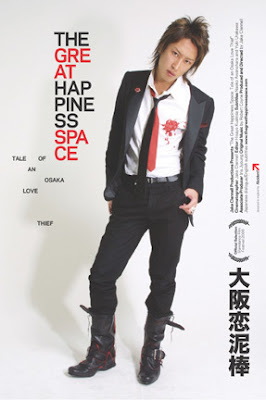 The Great Happiness Space: Tale of an Osaka Love Thief

When I was tooling around Osaka in 2006 I kept seeing these elaborately done up young men, stick thin, usually wearing black and with their bleached hair done up to look like David Bowie circa 1972. My ex-wife and I kept calling them “rock stars”, because that’s what they looked like. We didn’t know if they were gang members, fashion victims… or real rock stars. A year later when I was wandering through a local Blockbuster Video I saw a DVD with one of these very young men on the cover and it turns out that they were none of the above. Documentary filmmaker made these glamorous-looking guys the subject of his first film, “The Great Happiness Space: Tales of an Osaka Love Thief” (2006, by first time documentary filmmaker Jake Clennell) . I’m sure you’ve heard of Japanese hostess clubs, but have you heard of host clubs? Because that’s what these young men were/ are: male hosts.

The film centers around one particular club, Café Rakkyo, and its manager Issei, a young man older than his twenty or so years. He heads up a stable of androgynous pretty boys who each have their own stable of pretty young women who return to the club night after night to fulfill some elaborate romance fantasy. These women also pay top dollar for the privilege shelling out tens of thousands of yen a night (including $500 on pitchers filled with champagne and glow in the dark ice cubes) to feel that they are the special lady of their chosen host. The reality is of course something radically different: we watch Issei and his employees jumping from table to private booth in Rakkyo juggling women and “heartfelt” conversations like spinning plates. They’re very good at what they do too, seeing that many of the male hosts harbor a strong dislike for their clients who not only take an emotional toll on them, but a physical one. Issei explains how the hours and hours of drinking obscene amounts of alcohol has him throwing up blood, “My liver’s f**ked,” he tells Clennell.

There is quite a twist in “The Great Happiness Space” regarding these female clients, but to reveal it here would be a disservice to these very compelling film. Suffice to say that when it is revealed the whole nature of Café Rakkyo becomes even more tacky and seedy and… well… sad. I have to admit that as I was watching it I couldn’t help going back to Mikio Naruse’s wonderful 1960 film “When a Woman Ascends the Stairs”. For the over forty years that separates that story of a woman trapped in the life of a bar hostess and this documentary you can see that very little has changed in one of the oldest professions in Japan (or in any country for that matter). The two films would make a very interesting double bill.
Posted by Chris MaGee at 4:58 AM