Trains as billboards... and fine art... in Japan 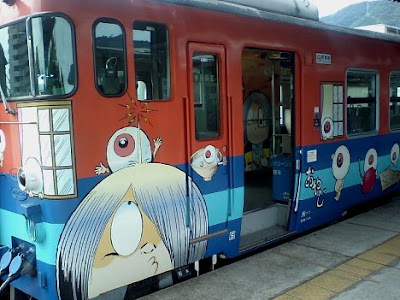 I can't say that I'm a big fan of those literally floor to ceiling ad campaigns that blitz the subways every once and awhile. You know the one's I'm talking about, where they cover every square inch of space from pillars to stairs to the trains themselves with oversized posters advertising the latest TV series or movie. It's a bit of sensory overkill first thing on a Monday morning, or even worse first thing on a Saturday morning when you have a hangover.

Well, it looks like we're not the only ones who have to contend with these ads. Pink Tentacle has posted an entire gallery of Japanese trains that have been transformed into billboards for various films and anime. Take for example the "Gegege no Kitaro" train above.

Thankfully not every train in the gallery is trying to sell something though. Some feature the designs of famed Japanese pop artist Tadanori Yokoo in an attempt to inject a bit of culture into people's daily commute. Now, there's something I could get behind. Take a note TTC, great art masterpiece trains!
Posted by Chris MaGee at 4:57 AM