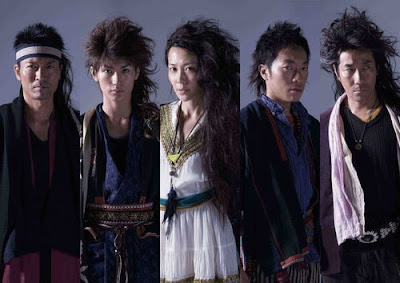 Yoshino Kimura's career has undergone a real transformation in the past few years. Starting out working primarily in Japanese TV since 2005 the 32-year-old actress (above center) has gone on to appear in a dozen films including Takashi Miike's "Sukiyaki Western Django", Yosuke Fujita's "Fine, Totally Fine" and Fernando Meirelles' "Blindness".

Now word comes down from Tokyograph that Kimura will now be taking to the stage in a historical fantasy titled "Hoshi no Daichi ni Furu Namida (Tears of a Star Falling to Earth)". In it she will play a woman who takes in a young warrior, played by teen heartthrob Haruma Miura (second from left), suffering from amnesia.

The stage play set to run at Tokyo's Akasaka ACT Theater from June 20 to July 26 is being directed by actor Goro Kishitani (far right) who just finished directing Kimura, along with actress Juri Ueno, in the upcoming film "Dead Heat, Virgin Road".
Posted by Chris MaGee at 8:03 PM