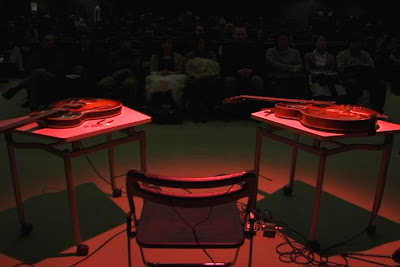 Yoshihide Otomo may not be a name that Japanese film fans are readily familiar with. If you've watched films like Akihiko Shiota's 2005 film "Canary" or the Edogawa Rampo omnibus film from that same year "Rampo Noir" you would have heard his work though. The 50-year-old Tokyo-based musician composed the soundtrack for each of these films, but that is hardly the extent of his output. Starting in 1990 with the noise rock group Ground Zero and then on his own Otomo has pushed the boundaries of sound working with free improvisation, electronic music, jazz and contemporary classical compositions. Think of a Glenn Branca, Ornette Coleman, DNA, John Cage and Sonic Youth all mixed into one and you'll start to grasp 's Otomo's style.

Filmmaker Chikara Iwai is currently at the Rotterdam International Film Festival presenting his documentary on Otomo titled appropriately enough "Kikoe" or roughly translated "Hearing" and it looks like fascinating stuff. Not only does Iwai capture the artist at work, but she speaks to many of Otomo's collaborators and admirers including avant-garde hip hop artist DJ Spooky and Czech filmmaker Jan Švankmajer. I have friends in Rotterdam at the moment catching this year's Film Festival, and after having seen the trailer for "Kikoe" I wish I was with them.

You can check out the trailer for "Kikoe" yourself at the website for this year's Rotterdam International Film Festival here, and as an added treat you can see and hear Otomo in action in this video of a performance he gave in Tokyo in December of 1994. Turn it up!