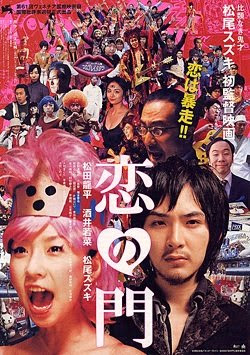 During the summer of 2007 I had the chance to attend my first ever Fan Expo full of horror, sci-fi, comic books and of course anime and manga. I'd heard and read about cosplay before, but had never really investigated it. I pretty much got a crash course as at the Expo aisle I ran into after aisle of characters from Inuyasha, Kiki’s Delivery Service, Dragonball Z and a whole bunch of other anime characters I couldn’t even recognize. So what better way to recall that first brush with culture shock than to watch “Otakus in Love”, Matsuo Suzuki’s 2004 adaptation of the Jun Hanyunyuu manga “Koi no Mon”.

Ryuhei Matsuda plays Mon, a dirt poor, virginal “manga” artist who we first meet on his way to a new day job, but a rain storm and a rock get in the way. You see Mon creates manga out of… well… rocks, and subsequently no one will take his work seriously. As he kneels down in a rain puddle to retrieve this latest bit of raw material he runs into (or gets stepped on by) the beautiful Koino (Wakana Sakai). This fateful meeting continues when Mon discovers that they now work at the same company… well, not for long because on his first day Mon gets fired and the two of them go out, get drunk and the next morning Mon wakes up with a hangover and the realization that he’s finally lost his virginity. It’s from this point on that “Otakus in Love” falls down the manga rabbit hole and becomes totally goofy, sometimes wonderfully so while other times things get so goofy they make you wince. 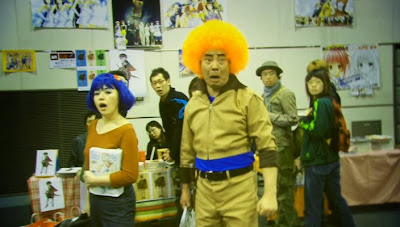 “Otakus in Love” was the directorial debut of actor Matsuo Suzuki who previously starred in such films as “Cutie Honey”, “Ping Pong” and “Ichi the Killer”. In fact he plays the supporting, but pivotal role of Marimoda, a washed up manga artist and owner of a manga café who ends up being just one of the many obstacles in the relationship between Mon and Koino. There’s the competition between Mon’s avant garde manga and Koino’s own more traditional shojo manga, a mysterious woman who works at the manga café who has her eyes set on Mon, Koino’s parents who aren’t entirely sure about this strange young man, and such practical concerns as mountains of debt. It’ll be a miracle if these two manga enthusiasts and budding lovers manage to ever get together.

If this sounds like a soap opera then you wouldn’t be far off, but it’s one that, like I said, has some fall down laughing moments (the reveal of Koino’s cosplay obsession is absolute comedy gold!), but the laughs get weighed down by the unending twists and turns in the hyper-romantic plotline that could have easily been trimmed by a half hour. It is fun though to play spot the cameo, though, with such Japanese cinema luminaries as Takashi Miike, Hideaki Anno and Shinya Tsukamoto making appearances. If you’re in the mood for something over the top and silly then give “Otakus in Love” a look.
Posted by Chris MaGee at 8:28 PM