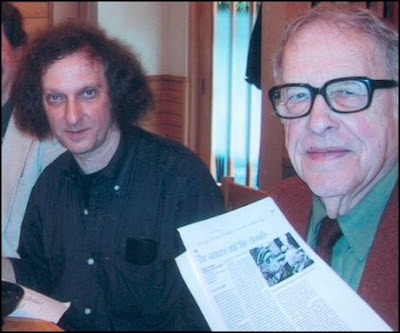 It was a whim that took 21-year-old arts instructor Marty Gross (above left) to Japan in 1970 to study pottery. “It was totally accidental, I did not know anyone in Japan, I did not speak a word of Japanese,” he explains, laughing at his youthful naiveté, “I had already spent a year backpacking in Europe and I thought how difficult could it be? I got there and I realized it could be an awful lot more difficult!” Regardless of those difficulties it was Gross’s desire to go “where people live and breathe by pottery making” that would ultimately lead him down a path that he could have hardly imagined. Nearly 40 years later he sits in the offices of Marty Gross Film Productions in Toronto, a company he founded in 1975. Surrounded by heirloom pots from around Japan and mementos from his close friendships with the likes of Teruyo Nogami, Tatsuya Nakadai and Toru Takemitsu he organizes and assembles the famously thorough and insightful extras and documentaries featured on the Criterion Collection’s Japanese DVD releases as well as providing translation and distribution services for such companies as NHK and Tezuka Productions; but how does an artist and York University drop out go from pottery to working alongside some of the biggest names in Japanese film history? The answer to that can be traced back to 1976 and a 16mm short that Gross shot titled “Potters at Work”.

It was during the five year gap that separated his initial stay in Japan training in an environment that he describes as being “semi-industrial” and his return to Okinawa in 1975 to continue his pottery studies that the inspiration for a film that would “express in a tangible way the essence of the folk craft movement in Japan” came to Gross. With the experience that he gained making his first award-winning short film, “…as we are” about teaching art to autistic children he headed to two of the most famed pottery-making centers in Kyushu . In the villages of Koishibara and Onda (the latter of which has been designated as a "Living National Treasure" by the Japanese government) Gross followed two of Japan ’s greatest potters, Shigeki Sakamoto and Kumao Ohta, as they practiced their craft. Without any dialogue or a soundtrack “Potters at Work” (below) is closer to a cinematic tone poem than a documentary, a hard sell as a film project, but Gross did what any proud filmmaker would do, "I had had some Japanese sponsors, so I took it to Japan and I had some screenings and people were invited." 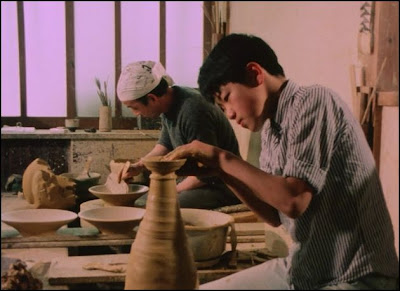 "It was a smaller movie world at the time," Gross acknowledges, so that those attending the screenings were a virtual who’s who of the Japanese cultural elite. Along with Nogami and Takemitsu whom Gross would forge long lasting friendships, others like Madame Kawakita, the head of the Japan Film Library Council and her daughter Kazuko Kawakita, award-winning documentary director and translator of the works of Yukio Mishima and Kenzaburo Oe, John Nathan, and even “La Jetée” and “Sans Soleil” director Chris Marker showed up in the audience. “It was a very collegial group of people,” Gross remembers, “Chris Marker and I used to go out and play video games in the early days of video games.”

Gross had to work up some courage to invite one particular audience member, though, one who would have a very important impact on Gross’s life and budding career. “I called Donald Richie.” Author of over 30 books including “The Inland Sea” and “The Japanese Movie. An Illustrated History” Richie (top right) had come to Japan during the American Occupation and has become widely acknowledged as the most preeminent scholar on Japanese cinema. “I had admired him so much. I had read his books on Ozu at the time and Kurosawa. He's a great man and I didn't know what he would think coming out to see a short film that had no commercial potential because it was not a film that you could release in anyway. A 30-minute film on Japanese potters, there was no way… And he came and I was very nervous, but he came.” Not only did Richie come, but he was so impressed with what he saw that he joined Toru Takemitsu (below right), composer of film scores for such classics as “The Woman in the Dunes”, “Kwaidan” and “Ran”, to help Gross in the making of his next film “The Lover’s Exile”. 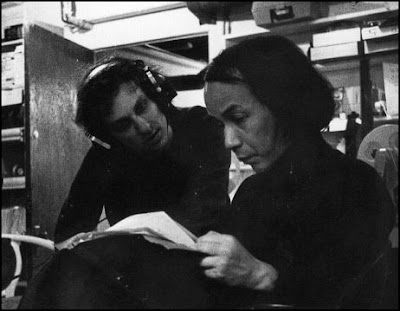 Capturing a performance of Monzaemon Chikamatsu’s 1711 bunraku puppet play “Meido no Hikyaku (The Courier of Hell)” proved to be a greater creative challenge than “Potters at Work." "We had the entire bunraku troupe for a month," Gross recounts,"I was determined to make it feel very authentic and very like the theatrical experience," but instead of shooting at the Asahi-za Theatre in Dotombori, Osaka, the main Bunraku Theatre at that time, where he would have had to climb over seats and contend with theatre technicians he made the bold decision of recreating a traditional bunraku stage from scratch. "We built the stage in Uzumasa on the same stage where ‘Ugetsu’ was shot. We built it on what was called 'Dai-ni sute-ji', the second stage at the Daei Uzumasu film studios, which don't exist anymore. So, it was quite an exciting moment to be able to work in that context."

Richie’s role in the production was to help with the translation of the archaic jōruri narration. “I had a Japanese assistant who read it to me, I typed it and mailed it to Donald and Donald would mail his translations back to me. We had to parse it out to make it fit.” With the subtitling taken care of Takemitsu came in to make sure that the sound in the film was perfect. “He was responsible for getting the tone right, and for making sure we didn’t edit incorrectly, to miss a word or miss a phrase.” This involved both making on set recordings of the narration, “Toru found the recording artist who actually did all of Oshima's films, Hideyoshi Mishizaki," and even a stay in Toronto doing post-production work, "I had an editing room in the basement at the time here and he worked with us on the sound mix. I think he was here for maybe ten days or so." The finished film ended up screening around the world, but it wasn't the last collaboration between Gross and Richie.

First off it was Gross's knowledge of Japanese theatre that had Richie recommending him to the people at the Criterion Collection. "There was a film that we [he and Richie] were working on at the time, which we haven't finished yet for Criterion, but it was a film that had its roots in Japanese theatre and Donald wrote to one of the producers at Criterion that I was the only person he knew that who could do this, who had the ability to produce and had the knowledge of Japanese theatre and Japanese cinema." It was a case of coming full circle for Gross who had known the original organizers of the Collection when they worked with Janus Films. "It was neat too, it never crossed my mind to volunteer to help them with anything," he admits. 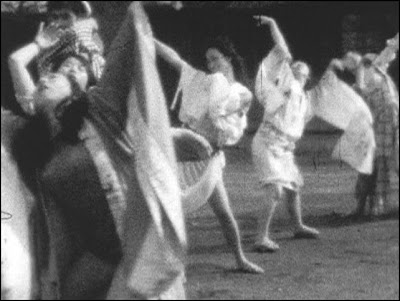 And most recently Gross has been quietly working to help raise the profile of Donald Richie the filmmaker. Although Marty Gross Film Productions is the exclusive distributor of "The Donald Richie Film Anthology", a collection of a half dozen of his short films, Gross estimates that Richie shot up to twenty, many of which have rarely, if ever, been seen. "Donald has asked me to help him restore and rerelease his films, the films that he himself made in the 60s and 70s in Japan." The two have already completed the restoration of a 15-minute film that Richie shot in collaboration with Japanese dance legend and founder of butoh, Tatsumi Hijikata. Shot at an abandoned factory in Kawasaki in 1959, "Gisei" or "Sacrifice" (above) evolved through Richie's and Hijikata's desire to create a "ritual-like entertainment" about an individual scapegoated by society. A friend of Richie's, a truck driver named Hatakeyama, was enlisted to dance a traditional matsuri dance as a contrast to the writhing and jerking of Hijikata's butoh dance troupe. When Hatakeyama momentarily pauses and then attempts to rejoin the dance he is terribly abused and humiliated. It's a sequence that would make even jaded modern audiences squirm in their seats. "[Richie] had never actually seen it since he'd first presented it because it was made on 8mm, regular 8mm, not Super 8, it still has those old S-splices in it, and he wanted me to figure out how the film could be put out again, put back into condition where people could see it." One of the key components of this process was to set Hijikata's dance to music. "It needed a soundtrack and at the time he got a record he liked (Handel's Hallelujah Chorus) and just dropped the needle on it whenever he presented the film. He wanted to find the film and he wanted music to be put to it, so I did that for him."

In a flashback to Gross's own difficulties in finding distribution for his 30-minute "Potters at Work" the two are looking for ways to properly exhibit such a short film. "We are planning a series of films on Tatsumi Hijikata at Lincoln Center, Walter Reade Cinema, next year," Gross explains, and one of them will be the film by Donald Richie."

Marty Gross's work as it stands today seems light years away from his vague goal in 1970 to study pottery in Japan, especially since as he puts it "Film as a career wasn't on the radar." That being said he admits he's glad to be back shooting documentaries for the Criterion Collection, but when asked if the world can expect a new Marty Gross film in the near future he answers with a slight smile, "I guess I got tired of searching for money. No."
Posted by Chris MaGee at 3:28 PM