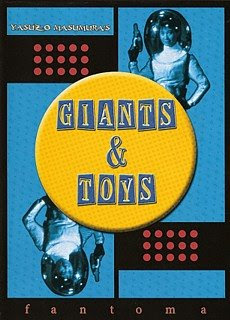 The business world is not pretty. Even the candy business is filled with opportunism, betrayal of trust and a thirst for power. Particularly in post-war Japan where the people are "always working", but still feel the need to continue to push harder. As one of the publicity executives in Yasuzo Masumura's 1958 satire "Giants & Toys" states: "This is Japan. We must work hard or else we won't survive".

The plot of Masumura's film is pretty straightforward. Three candy companies specializing in caramels (World, Apollo and Giant) are fighting it out for more sales and compete intensely against each other. The battle is viewed through two main employees of World - Goda, an up-and-coming exec who has married the publicity director's daughter, and Nishi, one of Goda's assistants. While the two of them are at a bar, Goda spots Kyoko - an 18 year old girl with terrible teeth, but also possessed of a sunny, spunky and child-like disposition. They convince her to become their poster girl and begin their campaign which is focused around space travel. As she bounces around in her astronaut suit and plastic gun during photo shoots and public appearances, Kyoko becomes more and more famous. She attends baseball games, concerts, TV appearances - anything for a sale. Meanwhile young Nishi, through a friend of his at Giant, meets and begins to fall in love with a more mature publicity woman from Apollo. He hopes to not only romance her but also garner information about his company's rival at the same time. As the entire story plays out, it continually highlights different aspects of what the post-war business world of Japan has become. 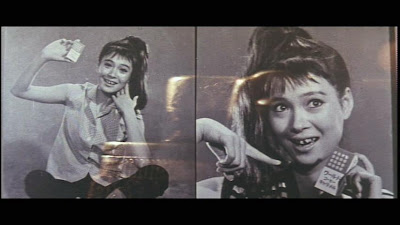 Once the film starts landing a few barbs, they start hitting more and more frequently. Showing the lengths people go to in order to achieve additional power and prestige, the film really begins to cut very sharply through many of the earmarks of a typical capitalist system - TV, mass media, the star system and the desire, no, the "need" to keep getting ahead. It's not just the candy company workers striving to win, it's everyone: the female TV producer described as a machine, the other aspiring poster girls, Nishi's friend ("I'll do anything for money") and Kyoko herself. As her success grows, so does her conceit and her desire to move away not only from her poverty, but her family too (even leaving behind her beloved tadpoles). Late in the film is probably the funniest and most absurd sequence: Kyoko's new career as a jazz singer takes flight in front of a TV audience as she sings about cannibalism - complete with cliche costume. Goda also begins to morph as he goes down his own obsessive path. With his own health beginning to suffer, he pushes himself further and further into his single purpose - at one point barking out at the company's board (as he positions himself to take over from his ailing, old school father-in-law): "Use radio, TV and movies to control them. You understand? Control their thoughts. The dictatorship of publicity!". His sham of a marriage is just one of the many relationships in the film that don't seem to stand a chance - loyalty is situational and betrayal seems to be assured.

If everything doesn't appear so rosy, at least the film itself looks amazing - the colours are always vibrant in pretty much every scene and jump out from the walls, the toys, the cars and the clothing. Well-crafted sets, careful framing and a terrific stylistic device of a flicking lighter (overlayed with the current thoughts of the person looking at it) complete the deft touches Masumura brings. The film is a way-ahead-of-its-time swipe at not only the world of big business and capitalism, but also many other borrowed pieces of (from their point of view) American culture and how they've been embraced in Japan. And if its reach is occasionally too broad, 50 years on its relevancy is still as high.

Read more from Bob Turnbull at his blog.
Posted by Chris MaGee at 3:25 PM