REVIEW: This World of Ours I truly believe that 2008 was a high watermark year for Japanese cinema, but it wasn't just because of established filmmakers like Hirokazu Kore-eda, Koki Mitani, Yoji Yamada and Kiyoshi Kurosawa releasing strong new works to receptive domestic and global audiences. Some of the biggest surprises came from relative newcomers and unknowns like Hajime Kadoi and his death row set "Kyuka (Vacation)" and Izuru Kumasaka's Berlin Film Festival Best First Feature Film-winning "Asyl: Park and Love Hotel"; but there was no bigger surprise in 2008 than a searing drama that screened at the Japan Film Festival in Los Angeles and the New York Asian Film Festival.

"This World Of Ours", an uncompromising look at contemporary Japanese youth, is the filmmaking debut of 24-year-old Ryo Nakajima, a former hikikomori or "pulling away/ confined person". This disturbing phenomena has predominantly young male Japanese withdrawing totally from society, cloistering themselves away in a single room from which they either do not want to or feel they cannot leave. Nakajima spent four years in this kind of self-imposed exile, unable to find his place in life and as he put it becoming increasingly "emotionally cornered". As a way of breaking out of this trap the then 19-year-old focused his energy on writing a script about people like himself: marginalized Japanese teenagers torn between hopelessness and hope as they approach adulthood and all its related compromises and stresses, and while it would be a real stretch to categorize "This World of Ours" as entertainment it's impossible not to see it as a work of profound cinematic and artistic importance. 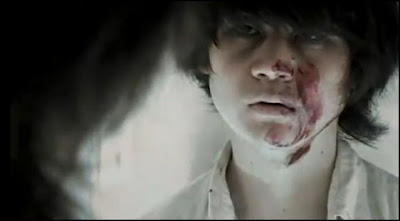 Our first entry into this world of Nakajima's is a rough one. Almost immediately we find ourselves subjected to a series of humiliations and horrors filmed in raw digital video that had me squirming in my seat: and a girl stands on the roof of her school cooly observing a homely-looking boy with a severe speech impediment being brutally bullied by his classmates. Cut ahead and she slips the boy a knife, encouraging him to kill his tormentors. Cut to a young man wearing a suit and tie on a job interview then jump ahead to this same young man asking the girl out for a night of drinking with a group of his buddies. These two bare bones narratives mix and clash. The stuttering boy attacks his bullies, spitting curses and threats while the night of binge drinking ends in a repulsive scene of gang rape of another girl by the group of young men wearing animal masks. All this happens within the first 25 minutes of the film during which I couldn't help being reminded of the sex and violence obsessed visions of Koji Wakamatsu, films that I've never been a huge fan of, and I had a very difficult time finding something to grasp onto in Nakajima's film, anything that would prevent me from simply turning off these unvarnished images of alienation and cruelty. In the end it was just stubborn determination that kept me watching "This World of Ours" and thankfully it paid off because it's only after that first half hour assault that the film really comes together, although it still doesn't let the viewer off the hook.

Out of this chaos of imagery emerges the film's three leads. There's Ryo, the leader of the pack of bullies who after having nearly been stabbed by his stuttering quarry begins skipping school, arguing with his mother and converting a fire extinguisher into a homemade bomb. The young man that we met on the job interview, Hiroki, struggles with his role in the gang rape of the young woman and the powerful hold that its ringleader has on him. Observing these two is Ami, the girl on the roof of the high school, a friend, observer and instigator for both Ryo and Hiroki who also hides her own dark secret, namely cutting and self-mutliation. Nakajima cast three non-actors in these roles and each is a revelation, giving gut-wrenching performances that have us alternately fascinated and repulsed by their characters. Will these three young people rise above their situations, come to terms with their own lives and the lives of those around them or will they continue to spiral deeper and deeper into depravity, grief and murder? It's this basic struggle that kept me fascinated during the remainder of the film.

Is "This World of Ours" the product of serious emotional and mental imbalance? I hate to make those kind of sweeping value judgments, but by Nakajima's own admission the genesis of the film was a desperate attempt by a young shut-in at catharsis and personal connection, so I would have to answer "yes"; but regardless of how harrowing an experience he created he succeeded admirably in both of these goals. By the end of "This World of Ours" we realize that we've been initiated, through blood and tears, into a world that we as polite and civilized adults would prefer not to acknowledge. This is the kind of film that Shunji Iwai's "All about Lily Chou-Chou" or Yutaka Tsuchiya's "Peep TV Show" can only dream of being: an explosive howl of rage, confusion and fear from the troubled youth of today.
Posted by Chris MaGee at 4:00 PM