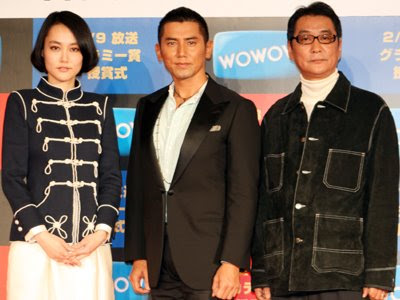 As we reported on the 22nd Yokiro Takita's "Departures (Okuribito)" has been nominated for Best Foreign Language Film at the 81st Annual Academy Awards, but now a neat bit of news relating to the nomination has been posted at Variety Japan. It turn out that when you're watching the Oscars broadcast you should be keeping an eye out for Takita and the film's star Masahiro Motoki in the audience. The two announced at a press conference on Thursday that they will be flying to Los Angeles to attend the awards ceremony taking place at Hollywood's Kodak Theatre on February 22nd. Takita and Motoki were joined by someone who knows a bit about the glitz and glamour of one of the world's biggest awards ceremonies, 2007 nominee for Best Supporting Actress Rinko Kikuchi, although she wasn't entirely successful in assuaging some of Motoki's nervousness about the big night. "I can't walk fast. It takes me almost an hour," the actor joked with reporters about the long walk he and Takita will have to take on the famed red carpet. I'm sure he'll do fine, but I still have my doubts if they'll be bringing golden statuettes home with them . We'll wait and see...
Posted by Chris MaGee at 3:16 PM