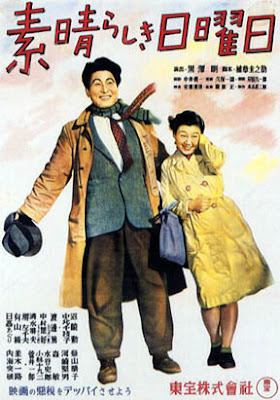 In 1947, Akira Kurosawa tried his hand at neo-realist drama in the vein of Vittorio De Sica and Frank Capra. The result was "One Wonderful Sunday", an insightful look at life as lived by the poorer citizens of postwar Tokyo . Adopting a day-in-the-life structure, "Sunday" begins with Yuzo (Isao Numazaki) and Masako (Chieko Nakakita) meeting on a busy street for their weekly date. With only thirty-five yen between them, they must make the best of their impoverished situation as they travel through the city.

Considerably more relaxed and free-form than Kurosawa’s previous film, "No Regrets for Our Youth", "Sunday" unfolds in an episodic manner, with the central duo learning more about themselves and their society with every new encounter. A glum apartment building desk clerk’s description of a squalid room up for an overpriced rent fee brings only mild disappointment. Shortly after, they join a baseball game held by a group of neighborhood scamps in the middle of a busy street. A trip to the zoo at first meant to distract becomes laced with comparisons to the outside world. A visit to a fancy club to find an old friend of Yuzo’s turns into a painful reminder of the lofty position where the upper class sits above the drunk and unemployed. While the realities of life constantly surround them, Yuzo and Masako gradually learn to endure by putting faith in their hopes and dreams for the future (which include living together and opening their own café). 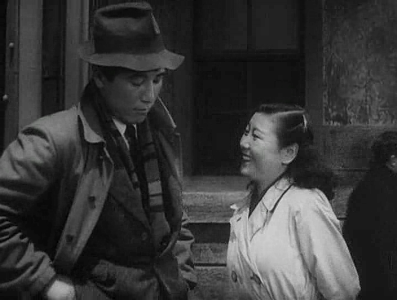 Without any reservations, "Sunday" clearly champions the plight of the downtrodden. For most of the film, Yuzo acts like a hopeless sourpuss, utterly depressed by his and Masako’s poverty and impervious to her efforts to cheer him up. However, in the precious few moments when his mood does brighten, the transformation is remarkable: his face loosens up, his frown breaks into a wide, child-like grin and his eyes positively sparkle with glee. Yuzo essentially see-saws between these two states throughout the film as Masako struggles to convince him of the power and value of imagination in the world they are living in.

While working quite nicely as a social document of the period in which it was made, "Sunday" also (perhaps not so effectively) asks its audience to invest a great deal of sympathy in its two main characters – at times quite literally. Kurosawa’s usual method of balancing sentimentality with harshness is a little more uneven here than in other films of his, but his efforts towards creating an emotionally engaging narrative are clearly felt and still illustrate his regular degree of attention to the audience’s relationship with the story.

"One Wonderful Sunday" is, like its characters (and so many of Kurosawa’s films), driven by the possibility of hope amongst desperation and cruelty. Championing the plight of the everyman, it is a very honest and heartfelt film, made, tellingly, with great responsibility and genuine concern for the well being of a mending nation’s struggling people.

Read more by Marc Saint-Cyr at his blog.
Posted by Chris MaGee at 3:18 PM