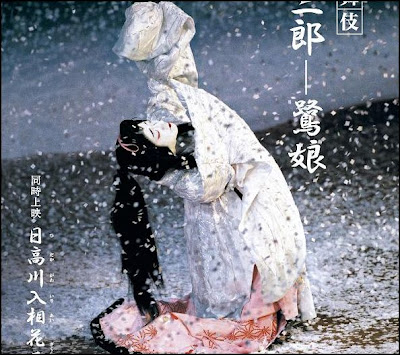 Here is some very good news both for Japanese film and theatre fans in Toronto. The Japan Foundation with the valued help of Toshi Aoyagi and Marty Gross are bringing Shochiku's "Cinema Kabuki" to the Scotiabank Theatre from Thursday, March 26th to Saturday, March 28th.

Regular readers of the site will know that we told you about how Shochiku tagged Yamada, the man behind the "Tora-san" series as well as "The Twlight Samurai" and "Hidden Blade", into being one of the filmmakers who would get the chance to capture a classic kabuki play in high-performance HD and surround sound and now we will get a rare chance to experience not only one of Yamada's contributions but also from acclaimed playwright and director Hideki Noda and Naoya Hasumi.

The three plays being brought to the Scotiabank Theatre will be Noda's comedy "Nezumi: The Japanese Robin Hood" about an 18th-century thief who like the legendary Robin Hood "stole from the rich and gave to the poor", Hasumi's dance drama "Dojoji: A Lover's Duet" which tells the story of a beautiful maiden (played by a male actor) who has been transformed into a serpent, and Yamada's domestic comedy "The Sentimental Plasterer" about a family that deals with their gambling father.

Tickets for all three of these screenings are limited, so if you want to attend either head to Cineplex.com to purchase tickets online or get yourself down to the Scotiabank Theatre at 259 Richmond St. W. fast. For showtimes and additional details check out the Japan Foundation Toronto website here. In the meantime check out the trailer for the Cinema Kabuki presentation of "Sagi Musume" to get a taste of just how amazing this project is.

Wow, exciting blog post regarding kabuki theater, I am a big fan of theater and theater dance and just collect my theater dance dress from at PIJ. This is really great to me.
http://bit.ly/X9c7YE