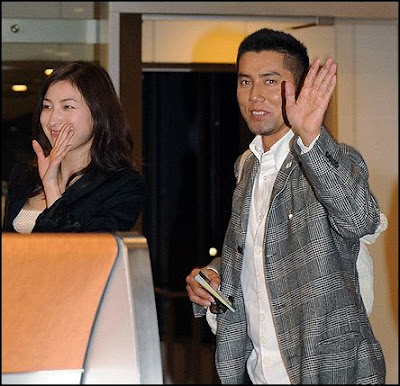 Well, it's the big night. Hot on the heels of their sweep of the 32nd Annual Japanese Academy Awards Masahiro Motoki (above right), Ryoko Hirosue (above left) along with director Yojiro Takita headed for the airport to attend the 81st Annual Academy Awards at the Kodak Theatre in Hollywood this evening in hopes that their film "Departures (Okuribito)" will bring home a golden statuette for Best Foreign Language Film. It's not just the trio that are making the trip though. According to a report posted at Nikkan Sports joining Takita and his two stars will be 21 crew members from the film! Obviously they won't all be sitting in the audience eagerly awaiting to hear whose name is announced, but with 21 of them I have visions of them storming the stage in a clown car and jumping out and grabbing the Oscar if "Departures" doesn't win!

If "Departures" does win tonight it will be the first time since 1955 that a Japanese film has won the Best Foreign language Film Oscar. That honour went to Hiroshi Inagaki's "Samurai: The Legend of Mushashi Miyamoto" starring Toshiro Mifune; but even though I am obviously a rabid fan of Japanese cinema I am doubtful that tonight will be the night to break that 54 year drought... although I'd love to be proven wrong. We'll have to wait until tonight to find out for sure... and security will have to keep an eye out for that clown car packed with a Japanese film crew.

Thanks to Nikkan Sports for the above pic.
Posted by Chris MaGee at 10:20 AM

just proven wrong, and ryoko looked so cute even though she didn't say anything

I can't tell you how happy I was to be proven wrong! Already writing up my piece for tomorrow morning. Yay!!!!!