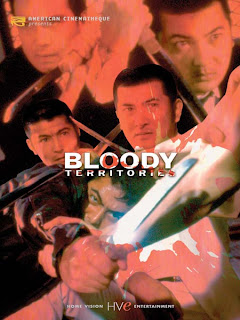 In the chaos that followed WW2 the yakuza, the Japanese mafia, ruled the streets, they’re number of active members ballooning to over 184,000 strong, greater than the post-war Japanese army. Extortion, black market goods, prostitution were all violently enforced, but the yakuza thought of themselves as the successors to the masterless ronin of history, protectors of villages and the common man. This belief was carried over into the movie theatres as well. Yakuza movies became the samurai films of their time with plots that revolved around lone gangsters as loyal to the “yakuza code” as their believed historical predecessors had been to bushido. These films were known as ninkyo-eiga or “honour films” and kept being churned out, sometimes dozens a year, by the Japanese film studios throughout the 50’s and 60’s. By the 70’s everything changed when director Kinji Fukasaku deconstructed the myth of the honourable yakuza in his landmark “Battles Without Honour and Humanity” which laid the groundwork for a more realistic and brutal take on organized crime. These jitsuroku-eiga, “true document films” continue to the present day with the work of Kitano, Miike and Mochizuki.

Yasuharu Hasebe’s 1969 film “Bloody Territories” straddles both eras of chivalry and brutality by showing us the violent end of an honourable yakuza clan. When the Sakura Association decides it’s time to call it quits and go entirely legit all it’s subordinate clans agree to disband, all except for the Onogi clan who’ve never done anything more than protect their area of Tokyo, so the Onogi boss and his men, Yuji (Akira Kobayashi), Seichi (Takamaru Sasaki) and Taro (Tatsuya Fuji) defy the order and continue on as if nothing has changed, but when a local rival clan and the big boys from Kansai try to start a bloody war to take over their turf Yuji has to decide whether to stay loyal to the old yakuza ways or to fight evil with evil.

For a genre that’s marked by its sometimes Byzantine plots “Bloody Territories” story of the old against the new is remarkably easy to follow and ends up being a really enjoyable ride from beginning to end. Star of such films as “Black Tight Killers”, “Kanto Wanderer” and Kinji Fukasaku's genre defining "Battles Without Honor and Humanity" series (and later on the the 70’s an Enka singing sensation) Kobayashi sniffs and scratches and delivers each line in a throaty rasp that gives the character of Yuji that extra bit of gravitas that he requires, and in some ways prefigures the onscreen persona of Takeshi Kitano. It’s also no secret that I’m a big fan of Tatsuya Fuji, and his portrayal of Taro as the last of a destroyed yakuza clan who grips a knife in one hand while cradling a stray kitten in the other gives us a microcosm of the entire film in one character.

While this may not be the pinnacle of the yakuza film “Bloody Territories” holds a unique place in the time line of the genre, and with its cast of regulars and easy to follow story makes it an ideal introduction to the Japanese mob in cinema.
Posted by Chris MaGee at 5:09 AM