What if Oda Nobunaga had been a woman? 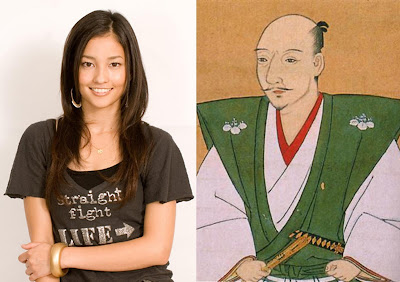 Alright, look at those two pictures above and tell me if you see any similarities. Anything? No, me neither, but according to a report at Tokyograph actress Meisa Kuroki on the left, who's previously starred in "Who's Camus Anyway?" and "Dance Sabaru", will be playing the fierce 16th-century Japanese warlord Oda Nobunaga on the right in an upcoming stage play at Tokyo's Aoyama Theatre. The play's title "Onna Nobunaga" is a clever play on words meaning "Woman Nobunaga", which was the crux of the novel by author Kenichi Sato that the play is based on: What if the man who nearly unified all of Japan and the predecessor to Hideyoshi Toyotomi who finished that job had been a woman?

Now I don't mind the occasional historical revisionism in the arts, but that sweet-looking 20-year-old on the left playing the notorious "Demon King" wasn't above killing tens of thousands of innocent non-combatants in his goal to control all of Japan? I don't know. I mean, if they got Eihi Shiina for the role I could believe it. She cut's people's heads off with piano wire for pete's sake!

Anyway, regardless of how appropriate the casting may be... Kuroki's Nobunaga will be joined on stage by singer/ actor Akinori Nakagawa who will be playing Akechi Mitsuhide, a samurai and general who served under Nobunaga. Serving meaning working for, not... You all have dirty minds.

"Onna Nobunaga" will run at Tokyo's Aoyama Theatre from June 5th to 21st and then move onto Osaka's Theatre BRAVA! for a three day run between June 26th and June 28th.
Posted by Chris MaGee at 1:58 PM