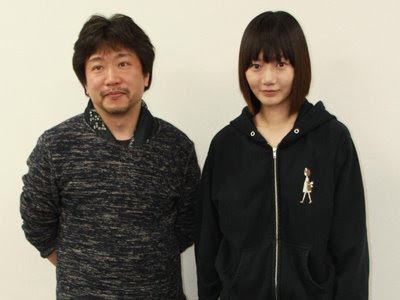 Hirokazu Kore-eda's next film "Kuuki Ningyou (Air Doll)" hasn't even been completed yet, but apparently Fortissimo Films has picked up the its international distribution rights. The deal came after negotiations between the Amsterdam-based distributor and Asmik Ace Entertainment at the currently ongoing Hong Kong Filmmart. This is Kore-eda's 12th film, but his very first manga adaptation with "Kuuki Ningyou" being based on Yoshiie Gouda’s story of an inflatable sex doll who comes to life and falls in love with a part-time video store clerk. Korean actress Bae Doo-na (above right with the director) will portray the newly enlivened doll.

With the announcement of this new deal came two very interesting tidbits about the production. First, "Kuuki Ningyou" is almost completed post-production and will hopefully be finished by next month. This will hopefully put it in the running to be included in the line-up of this year's Cannes Film Festival. Second, one of the masters of cinematography, Mark Li Ping-bing, worked as D.O.P. on the film. Ping-bing's previous credits include co-cinematographer duties with Christopher Doyle on Wong Kar Wai's "In the Mood for Love" and many of Taiwanese director Hou Hsiao-hsien's films.

Of course this distribution deal is great news for what is fast turning into one of Japanese film fans most hotly anticipated projects of 2009, but it still leaves me scratching my head a bit as to why Kore-Eda's wonderful 2008 has not yet been picked up for international distribution. Hmmm....

Thanks to Screen Daily via KFC Cinema for the details on this story.
Posted by Chris MaGee at 5:02 AM