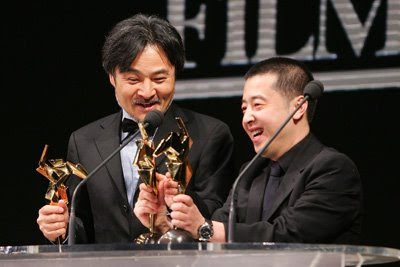 Just when you thought that the awards season for 2008 had come to an end Jason Gray shows up in his tuxedo fresh from the 3rd Annual Asian Film Awards that took place at the Grand Hyatt Hong Kong last night with a list of Japanese winners. If you remember Jason had already posted a list of Japanese nominees back in January but now it looks like Kiyoshi Kurosawa (above left) has picked up Best Film and Best Screenplay for "Tokyo Sonata", Hirokazu Kore-eda was named Best Director for his work on "Still Walking", Masahiro Motoki has yet another Best Actor trophy to add to the collection for his performance in the Oscar-winning "Departures" and one of my favorite, if not the favorite, film composer Jo Hisaishi picked up Best Music for his score for "Departures".

Congratulations to all the winners and to all those nominated. You can check out lists of each at the official Asian Film Awards here. Thanks to Variety Japan for the above pic of Kurosawa receiving one of his well-deserved awards.
Posted by Chris MaGee at 5:06 AM