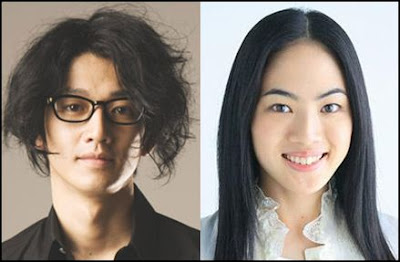 It seems that if you're an actor in Japan (or for that matter most parts of East Asia) you pretty much have to be a jack of all trades. Screen actor, TV actor, stage actor, singing star, etc, etc. so many of our favorite stars of current Japanese films do all of the above and more. Case in point: 26-year-old actor Eita who's appeared in such films as "Azumi", "Dororo", "Hanging Garden" and Koji Yakusho's upcoming directorial debut "Gama no Abura (Toad's Oil)". Besides those credits he's starred in nine other films and numerous TV series and even commercials. Now Eita will be expanding his repertoire by making his stage debut in the upcoming stage adaptation of the classic Japanese ghost story "Kaidan Botan Doro".

Stretching back to the 17th-century "Kaidan Botan Doro" tells the tale of a samurai named Ogiwara who pledges his undying love to a mysterious woman named Otsuyu who visits him nightly carrying a peony lantern. A local Buddhist priest discovers that Otsuyu is actually a ghost and sets about trying to save Ogiwara.

Of course Eita (above left) will star as the love struck Ogiwara while 25-year-old Yuki Shibamoto (above right) will play his otherworldly lover. The remainder of the cast will be rounded out by Yasunori Danta, Ran Ito, Tetsuya Chiba and Natsuko Akiyama with the stage play being directed by Hidenori Inoue.

"Kaidan Botan Doro" opens at the Bunkamura Theatre Cocoon in Shibuya, Tokyo this coming August. Thanks to Tokyograph for the details on this.
Posted by Chris MaGee at 5:14 AM