BOOK REVIEW: Behind the Pink Curtain 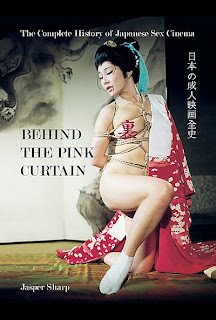 Behind the Pink Curtain: The Complete History of Japanese Sex Cinema

I'm usually dubious of any book that claims to be the "complete history" of any subject, and Jasper Sharp's "Behind the Pink Curtain: The Complete History of Japanese Sex Cinema" is no exception. Having slogged through the Weissers' "Sex Films" encyclopedia as well as dreck like Nicholas Bornoff's "Pink Samurai: Love , Marriage and Sex in Contemporary Japan" hoping to get a better grasp of pink eiga, I had a justifiable fear that Sharp (below left) would feel it necessary to justify his title and discuss each and every pink film. Not to worry. Sharp qualifies his title's claim early on by verifying something every movie fan fears, that many pink films--particularly those made in the 1950s and '60s--are lost and therefore unviewable. However, the book provides something more valuable than film-by-film reviews: context. It's the historicity of the thing that makes it invaluable to any fan of Japanese cinema.

And what a difference that context makes. Sharp establishes a basis for his discussion of the movies by defining terms then dives in, isolating specific directors and placing their work into the appropriate milieu. He examines the major works in detail and at least touches upon minor yet interesting movies, noting thematic similarities and differences, and the cause and effect each had on the genre. That Sharp can do this with a degree of scholarly precision yet also keep it readable is high praise. Whenever I felt the lengthy discussion of the politics (both intentional and incidental) of Koji Wakamatsu and Masao Adachi got slightly bogged down in the specifics of the radical movement of the 1960s, Sharp would bring in another film and prove that the detail was not only necessary, but welcome. A good example is Wakamatsu's "Ecstasy of the Angels": In a typically British bit of understatement Sharp suggests that without proper context the film may make for "not very satisfactory viewing", a statement that elicited not only an immediate belly laugh but a nod of agreement. I can now re-watch the film with knowledge of the self-destructive activist terrorism of student governments, extreme left-wing groups, and red army factions that informed it and come away with more than a head sore from scratching.

Don't get me wrong. Pink films can be appreciated on a purely instinctual level; Many of the titles make up for their low budgets with every tool and trick at the filmmaker's disposal (see "The Embryo Hunts in Secret", which features two actors in a single room for the duration of it's run time). But many of the eroductions from the 1960s and early 70s take on special significance when viewed through the prism of social unrest. In many cases these were political films with sexual content, and viewing them as such changes the experience.

I'll admit to being on the pinky violence bandwagon. While I had seen a few pink films at revival houses here and there, it wasn't until companies like Panik House started reissuing the movies that I took more than a cursory interest. Sharp details how the radicalism of the '60s morphed into the pinky violence and torture films of the '70s and the misogyny of the '80s, and how some aspects of the auteurism that shaped the earlier films shifted into the house style at various studios, most notably Nikkatsu. In any art form, once something moves from the avant garde to the mainstream it must change. Actions on film that would spark lawsuits and condemnation then are relatively commonplace now. But that's not to say that pink films have lost their relevance or political edge completely--the international film festival success of 2004's "Glamorous Life of Sachiko Hanai" (below right) is proof of that.

Japanese film enthusiasts can't ignore pink any more than western film enthusiasts can ignore MTV. Like the music videos that launched the careers of David Fincher, Spike Jonze and Michel Gondry, pink films are a proving ground for young directors who go on to considerable mainstream success. This year's academy awards are ample proof of that: Director Yojiro Takita cut his teeth in the pink film industry, as have dozens of other well-regarded filmmakers. "Behind the Pink Curtain" explains how and why that's the case.

Sharp's humor is one of the book's charms. One vital thing separating "Behind the Pink Curtain" from other scholarly examinations of film movements is a turn of phrase like "A uniformed office lady on a crowded commuter train mews in ecstasy as a mustachioed creep fumbles beneath her skirt", or "The hot summer seaside setting is instead livened up with some kinky games involving pachinko balls and the queasy spectacle of an abalone squirming in Saki's boat during a bout of on-deck lovemaking". Now, I don't want to misrepresent the book as a laugh a minute or Sharp's writing as glib, but there are chuckles to be had.

The book is profusely illustrated, well designed, indexed and thoroughly annotated. My only real beef is with those notes: They're tucked away at the end of each chapter, requiring the reader flip back and forth, and it makes for an awkward read. Footnotes would have made a big difference! But as complaints go, that's as minor as they come. Highly recommended.
Posted by Chris MaGee at 5:15 AM