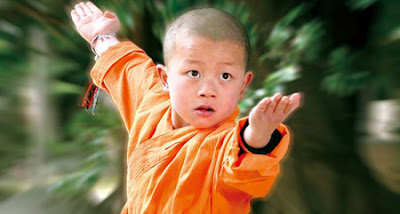 If you're reading this in Toronto and you have some little ones at home then take notice! Besides assembling dozens of films for grown ups from around the world for TIFF the Toronto International Film Festival Group also scours the globe for films for kids that they screen annually during the Sprockets Toronto International Film Festival for Children. The festival is getting ready for its 11th year and have just released their full program which includes 70 films from 22 different countries. One of those countries is Japan with Issei Oda's 2007 kung fu kids movie "Kung Fu Kun" (retitled "Kung Fun Kid" for the international market) starring 8-year-old kung fu prodigy Zhang Zhuang. Zhuang was picked out of over 2,000 kung fu trained kids for the role of Kung Fu Kun, a boy sent by his master from China to Japan for the last battle of his training: helping a Japanese woman who runs her own restaurant get her kidnapped daughter back from a group of villains set on world domination. Okay, it sounds dumb, but this wasn't made for us, it was made for kids and judging by the trailer below anyone under 12 would have a blast with this one. Just don't feed the little guys too much sugar in the theatre otherwise they'll be karate chopping and drop kicking each other like crazy in the parking lot afterward.

"Kung Fu Kun" will be screening at the Canada Square Theatres on Saturday, April 18 at 11:20 a.m. and Sunday, April 19th at 9:45 a.m. as part of this year's Sprockets Toronto International Film Festival for Children running from April 18th to 24th. For a full listing of films and locations check out the official Sprockets website here.