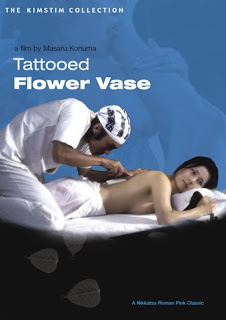 Reviewed by Bob Turnbull
The genre of "pink" films from Japan are known for their copious amounts of nudity and sex, but also for the fact that their stories and visuals are just as interesting. In other words, if all the nudity and sex were removed, you could still envision the film as being engaging. Don't get me wrong, they're still very much exploitation films, but who says you can't still tell an interesting story in a stylish way when you are in the midst of exploiting? And that goes for "Tattooed Flower Vase" (or "Tattooed Core Of Flower" as the subtitles called it) - there's no doubt as to its purpose, but it still manages to introduce you to some interesting, flawed characters.

Takako is a student photographer closing in on graduation and she lives with her step-mother with whom she's developed a close bond. Michiyo feels that her sole remaining duty is to marry off Takako even though her step-daughter has offered to stay single forever in order that they can continue to live together. Takako still feels sorry for her step-mom since she was only married and living with her Dad for about 6 months before he died, but she also tends to throw tantrums when she thinks her Mom wants to get married or mistakes her for being intimate with someone. This leads to her running off, getting hit by a car and then enticing the driver to sleep with her - even though she initially doesn't seem to enjoy it much. Michiyo is a bit torn - she sees an opportunity for her daughter to marry, but is also attracted to the young man since he reminds her of her former famous actor lover. Michiyo eventually winds up in a tattoo parlour and demands that the entire legend of Dojoji (her lover's most famous role) be tattooed over her. Now I don't really know what strides in technology the tattoo business has made since 1976, but let's hope they are big ones...The process of scraping with a small scalpel like instrument while scrubbing the ink onto the skin is shown in close up detail. Combined with the horrible slicing sounds and the vast quantities of red ink used, it's a wince inducing section of the film. The resultant tattoo is stunning though and Michiyo seems emboldened by its power and moves toward resolving her dilemma. 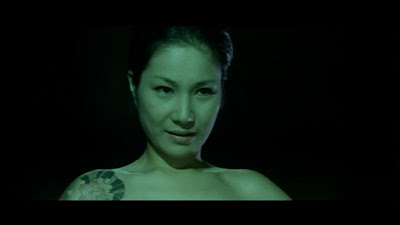 The film certainly doesn't compromise on full frontal nudity or the simulated sex scenes, but it is occasionally amusing to notice how they maneuver props into the right position to obscure the lower regions of the female anatomy. In particular is one scene where Michiyo is pleasuring herself and yet still manages to keep a small opened fan just on top of her privates. It certainly feels like director Masaru Konuma had some fun with this requirement and purposely brought attention to it. Later in the film, there is simply a fuzzy black dot covering the lower areas of male and female characters - I'm not sure if Konuma wanted to address censorship via this tactic or if the film itself was censored (I expect it was the former). He also brings a fine eye to detail throughout much of the film and emphasizes voyeurism via certain effects, angles and careful framing - for example, a shot of two separate rooms from above or another of the face of a character being reflected via many broken shards of a mirror.

While not a rousing exploitation film, "Tattooed Flower Vase" uses the form to paint a portrait of a woman who has been struggling with the loss of her one true love.

Read more from Bob Turnbull at his blog.
Posted by Chris MaGee at 1:58 PM